Devil Gets its Due in This Solid Thriller 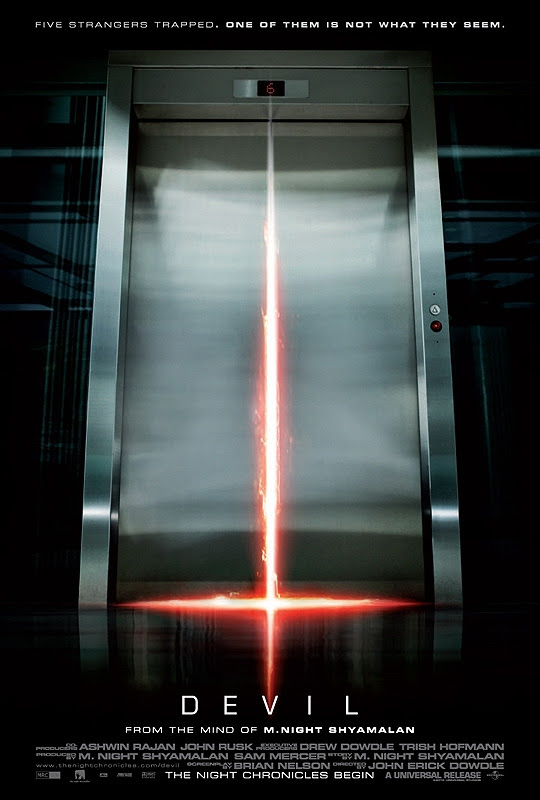 Young Woman: Don't come near me; any of you.

To start things off, Devil a solid genre film.  The film is the first of a film series known as “The Night Chronicles.”  The films in this series will all be produced by M. Night Shyamalan, based on stories that he has come up with.  Fortunately, he is not the screenwriter or director of these films.  I don’t want to get into another spiel about the problems with Shyamalan, but suffice it to say that his writing has not been his strong suit in recent years.  Fortunately, the crew involved in the making of this film has done a fine job at creating a short but sweet thriller.  The film is quick paced with enough tension and twists to keep everything engaging before wearing out its welcome.
The setup is simple – five strangers board an elevator in a high rise.  The elevator becomes stuck and strange occurrences start to occur.  All sorts of maintenance issues conveniently keep it from being fixed, while tensions stir between the people inside.  Over time, we realize that one of these people is committing violent acts against the others, as the lights turn on and off.  Meanwhile, a detective, who was already in the building due to a suicide earlier in the day, is monitoring the elevator, trying to make sense of all that is going on.  However, as we, the audience, are informed of throughout, these occurrences are not random; it is in fact the work of the Devil.
Walking into this film, I didn’t know what to expect.  The first minute and forty-five seconds of the trailer for this film are quite intriguing, but then you get to the phrase, “from the mind of M. Night Shyamalan,” and it nearly ruins the appeal (as was evidenced by the loud “boos” and laughs from the crowd I heard every time I saw this trailer).  Walking out of this film, I was very happy with what I saw.  The film is very effectively made, is handled quite well in terms of its setup and payoff, and never tries to be too clever for its own good.  This is a high concept film that delivers the kind of entertainment you’d want.
In terms of the film being a horror/thriller, I wouldn’t go so far to say that it was very scary, but it certainly knew how to conceive tense situations.  Setting the film in an elevator makes for a good sense of Claustrophobia (although the upcoming Buried seems 1-up that aspect).  One particularly effective element was knowing that something bad would happen every time the lights were about to go out.  Other sequences involving the attempts to fix the elevator were also well handled.  And for a PG-13 film, there was quite a bit of bloodshed.  Again, it’s not so much about big scares as it was about building suspense, but I appreciate that more than typical jump scares.

Detective Bowden: All of you just stay calm!

As far as the actors go, there are no standouts among the participants in the elevator.  This is not to say that they’re bad, but this is a short film, and it’s not like I wanted more time for them to elaborate on their characters.  We learn all we need to, and as a result we get a good enough idea of who these people are, and enough to work with for creating our own theories on what is going on.  On the outside of the elevator, we do have Chris Messina as the detective, who we actually learn the most about, and for what he is required to do in this film, it is pulled off quite well.
With this functioning as a B-movie, which you should be able to tell from it’s slick opening credit sequence and the score that accompanies it, let alone the title of the film, it is of course not striving to be perfect.  Some of the dialogue can be pretty bad and some of the acting is a little over-the-top.  The worst violator of this is one of the building security guards, who basically serves as religious exposition man.  All of his lines (he also serves as the narrator) are based on the fact that he is a superstitious Christian and needs to get across to the audience what is going on.  While this element is kind of necessary for the film, his delivery is mostly played for camp, which tends to bounce around the tone of this film.
Still, as a simple, high concept, genre thriller, this is an entertaining film, which one should be able to get some fun out of if they understand what they are getting into.  While I may never want to step into the mind of M. Night Shyamalan, I am curious to see what else pours out in the future for this film series.

Young Woman: Turn on the light!

Note:  One of the films in “The Night Chronicles” will essentially be the plot of the sequel to Unbreakable, which will never be made due to the lack of success to what was Shyamalan’s best film.