The Last Airbender = The Last Straw for Shyamalan 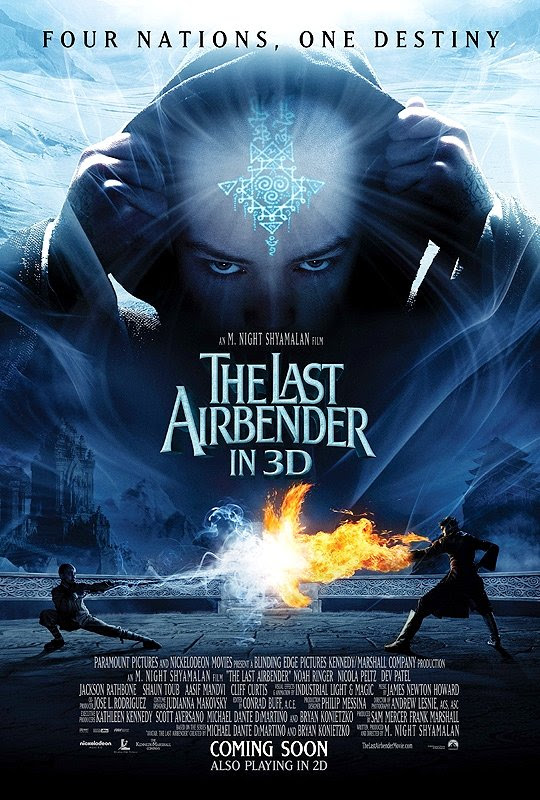 The Last Airbender: 1 out of 5 stars


Aang: Is there some place really spiritual, where I can meditate?

*sigh* After coming off of what many people considered to be a joke of a film (The Happening) Writer/Director M. Night Shyamalan has returned with his adaptation of the highly praised and popular Nickelodeon animated series: Avatar: The Last Airbender. Unfortunately, Shyamalan has somehow managed to make one of the worst films of 2010. A combination of bad storytelling, poorly written/delivered dialogue, terrible character development, questionable casting choices, and many other elements have resulted in a very big missed opportunity from a property and director capable of so much more.

Just as in the TV series, the film is set in a world divided up into four nations: Air, Water, Earth, and Fire. Within these nations, there are people, known as benders, who are capable of controlling the individual elements. A messianic figure, known as the Avatar, is the only one capable of controlling all four elements and maintains a balance of peace throughout the world. Unfortunately, the Avatar has gone missing over a hundred years ago, and the fire nation has decided to try and take over the world through the use of brute force and deadly metal machines.

There may be hope however, as two unlikely heroes, young teen siblings from the southern water tribe, Katara and Sokka (Nicola Peltz and Jackson Rathbone), have discovered a boy and his large flying pet, hidden underneath the ice. Once the boy, Aang (Noah Ringer) emerges, it would appear that he is the missing Avatar who could potentially, once again, bring balance to the world. Aang, Katara, and Sokka set out with plans to have Aang continue his training to master all four elements, while also spreading the word that the Avatar has returned.

There is still danger however, as an exiled prince, Zuko (Dev Patel), and his Uncle Iroh (Shaun Toub) are dedicated to finding the Avatar and bringing him to the Fire Lord, played by Cliff Curtis. And so is the evil Commander Zhao, played by former Daily Show correspondent Aasif Mandvi, who may be resorting to more drastic measures.

I guess I'll start with the good elements. While there are many utterly terrible ways that the majority of this film was handled, there are maybe one or two elaborate action sequences involving a seamless single camera shot that worked for me. James Newton Howard's score was pretty decent. And Dev Patel doesn't embarrass himself in his role.

Now for the problems. To start, the entire first season of the series (20 episodes) is being condensed to fit into one film. Obviously one film can't be expected to cover everything to please fans in every way possible, but Shyamalan has gone the extra mile by rushing through everything in order to end the film in about an hour and forty minutes. By doing this, the film manages to have a wonderfully uneven pace, where the characters arrive in different sets quickly, but then manage to make each of these places boring for the next reason this film sucks - terrible dialogue and character development.

This film's script is god awful. There is a ton of exposition delivered in the least interesting ways possible, never given in a way that is organic to the story, only serving to let the audience know exactly what is going on, regardless of its lecture format. Worse, much of the narration basically serves as a way of further rushing through how characters arrive at where they are location and emotion wise.

The characters are very poorly crafted. Our lead hero, Aang, is stripped any resembling a personality. Katara is around to deliver the narrated passages. And Sokka, designed in the show to be comic relief, literally has no jokes to share whatsoever. Sure the actors deliver their lines, but there is no heart in these performances. Not helping are the adult actors, who could have easily at least played everything over the top, but instead adopt the same dull tone that fits this very dull film.

And this leads to the next problem. The film is very dull. Much of the series relies on its humor as much as its story/action, but here, there is next to no humor beyond a few poor attempts at supplying some laughs. With all this in mind who is this film appealing to?

If there was some solid action and special effects, some of these bad elements may have been able to be overlooked. Unfortunately, beyond a few sequences, nothing really stands as impressive. The action choreography once again feels quite dull, with a lot of posing taking up more run time than actual fighting; and the actual fighting occurring in the background looking very stagey. The effects also manage to be underwhelming, with the bending powers seemingly looking to be very harmless to anyone attacked by them and the two pets that Aang has coming off more creepy than cuddly.


Princess Yue: We have to show them that we believe in our beliefs as much as they believe in theirs.

It certainly helps that Shayamalan has taken credit as writer, producer, and director, because I know exactly where to place the blame. I was actually looking forward to this movie. I thought that after having full creative control over his other movies, which have gone on to bring him farther and farther down in credibility, a big studio picture may have forced him to hold back on going with his gut and instead lead to an agreeable picture to be admired by. Unfortunately that isn't the case. As much as I feel that Shyamalan is a capable visual director, and knowing that he and his family were big fans of the series, I just don't know how he could have assembled a film this poor. Not just mediocre, but unsettlingly bad and very untrue to its source.

I would almost say that at least this film is harmless, but then I must remember to point out the "racebending" element that many others have. While picking white actors to portray the heroes shouldn't be a bother, if the right people had been found for the parts, it does matter to me that the heroes are so obviously white compared to the very ethnically diverse cast that puts Indian/Middle Easterners as the evil fire nation and Asians as the defeated earth nation. Meanwhile, whites all serve as the courageous and heroic water bending tribes. A series so very grounded in Inuit and Asian culture could have certainly benefited from sticking more to it.

So what's left to say? I can only hope that this (potential) series can't go any lower; and is perhaps a very low start to a (maybe) better franchise. I was fortunate enough to avoid the added-on 3D, which could have only made me have a worse reaction to the film. And I guess this may be a final farewell for holding onto hope for a decent Shyamalan film, with him serving as the writer at least.


Katara: Why didn't you tell us you were the Avatar?
Aang: Because... I never wanted to be