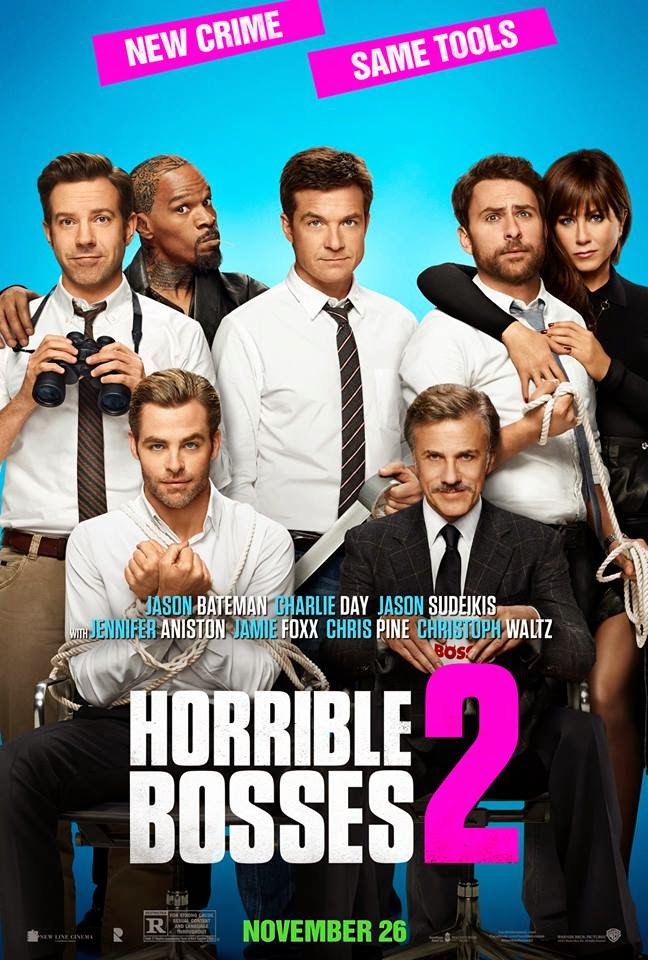 There is a point in Horrible Bosses 2 where a character is asked what took place and his response is that he is unsure, because the three lead characters were yammering too much for him to be certain.  Jason Bateman, Charlie Day, and Jason Sudeikis have great chemistry, no doubt about it.  Their banter, which features each performer playing up the key aspect of their comedic personas that make them enjoyable to watch for many, is key to maintaining a level of energy for a film that was not really needed.  I liked Horrible Bosses okay, but a sequel seemed like overkill.  Now I have seen it and while the concept is pretty thin, enough is done to make it fairly enjoyable.  With that in mind, the way it leans hard on some weirdly uncomfortable jokes keeps it from being one I really need to see twice. 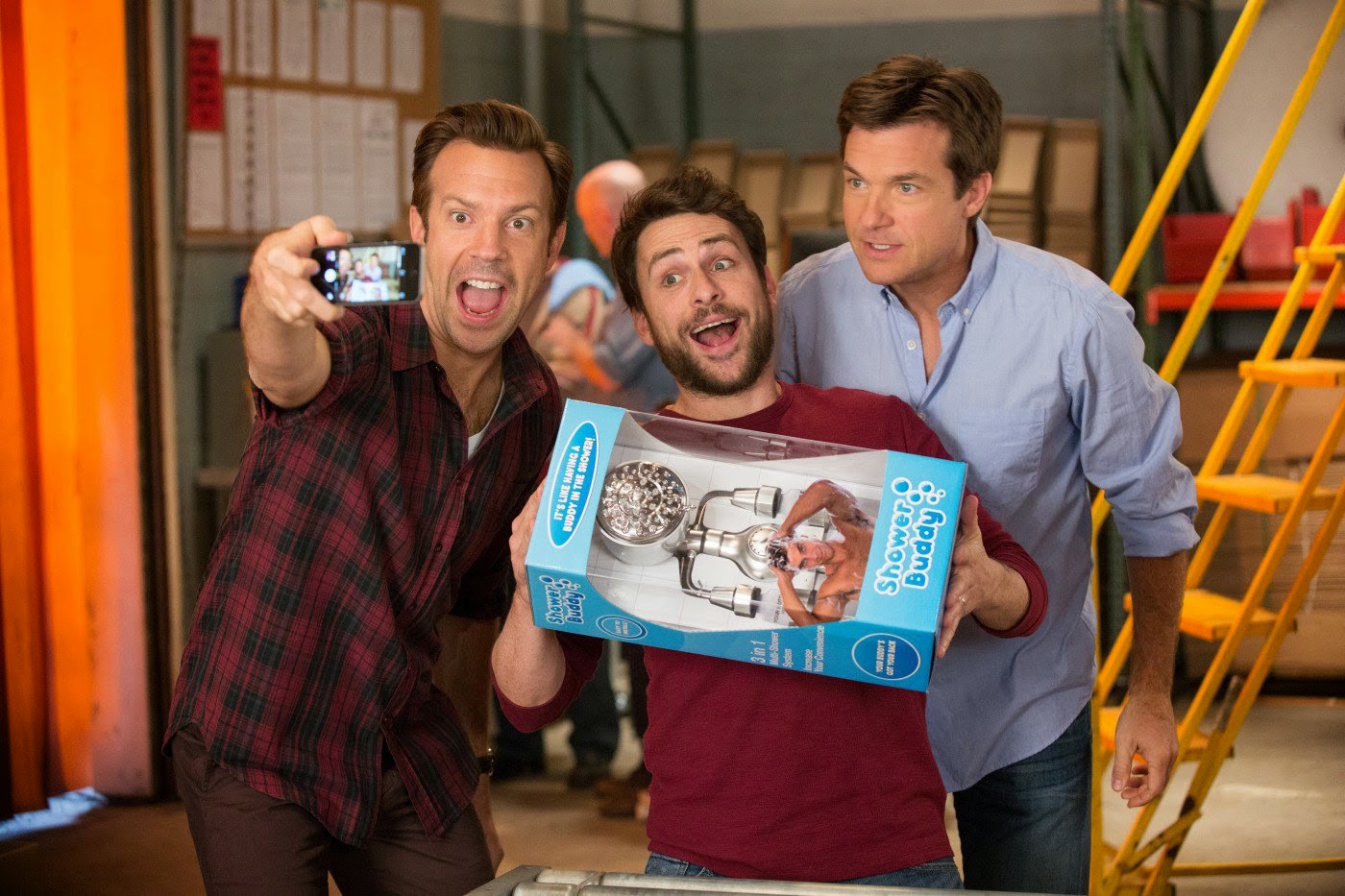 This time around, Nick, Dale, and Kurt (Bateman, Day, and Sudeikis) have decided to launch their own business and be their own bosses.  All they need is a backer for the product they have come up with.  An investor (Christoph Waltz) approaches them and essentially tricks them into doing all the work, which will end up bankrupting the guys.  As the guys are not ones to repeat themselves, murder is out of the question this time around, which leads to the obvious backup plan: kidnapping (not kidnaping).  The trio decides to kidnap the investor’s son (Chris Pine), only to find that he wants to be kidnapped as a part of his own scheme, which ends up making the plan more than a handful for a trio of guys who are terrible at trying to be criminals.

With the first film, I had fun with the idea and was mostly happy with the payoff.  The core cast of good guys was solid and it had obvious aspects that pulled audiences in when it came to the bosses.  Jennifer Aniston, in particular, worked as a chief selling point, given how different of a role it would be for her.  My main issue stemmed from a lack of darkness in what could have been a darker comedy.  I had other issues, but I also laughed quite a bit.  Horrible Bosses 2 basically runs into the same issue, with a flimsier premise setting up the story and a lack of much drama to make everything feel more significant (Charlie Day’s character is the only person who actually stands to lose something in a film with 7 main characters).  That said, this is basically an R-rated cartoon, so I cannot hold too much against the film for being a certain way, as long as I laughed. 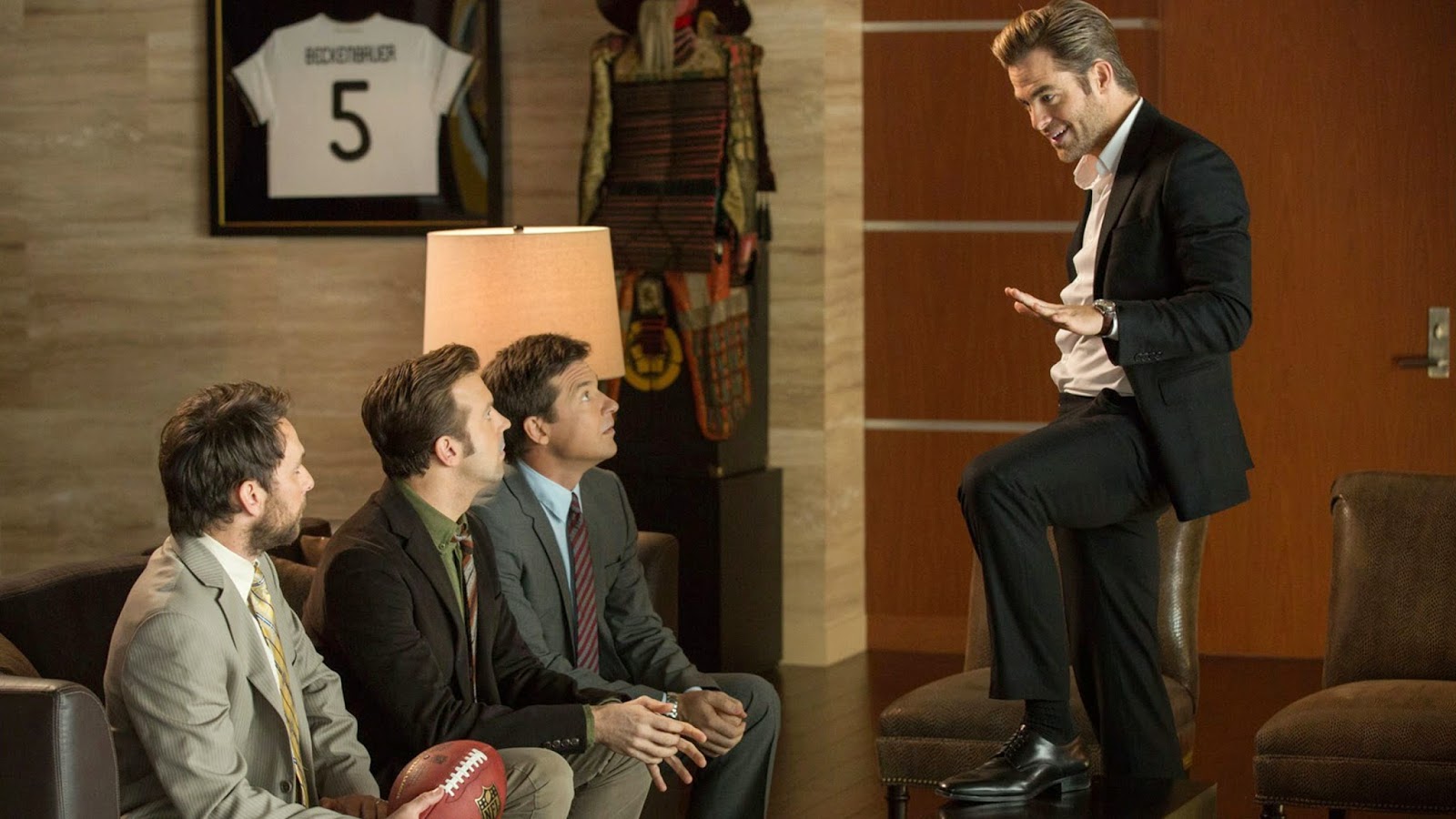 This is where the problem arises, as I did laugh quite a bit, based purely on what Bateman, Day, and Sudeikis were up to.  Save for a few moments here or there from some of the other cast members, the supporting cast is pretty much wasted, depending on what everyone finds funny.  The addition of Chris Pine to the cast is a good idea, as he can channel the energy he has with Captain Kirk and basically funnel it into a character that is allowed to go full a**hole, but Christoph Waltz’s role as Pine’s father goes nowhere near a place that could have really used Waltz’s talents.  Jennifer Aniston’s return would have been good if she wasn’t so forcefully throwing out every uncomfortably crude sex/rape joke possible.  And then you have Jamie Foxx who is funny in moments, but more of a joke character based on what the other three leads have to say to him after the fact.

It really does come down to the crude sexual humor.  It is hard to try and separate what works and what doesn’t, when it comes to dirty-mouthed, R-rated comedies, but suffice it to say that the way Horrible Bosses 2 goes about getting laughs out of this sort of material feels like a lazy crutch.  Giving us various ways to mine humor out of rape-based jokes has the ability to work, but writer/director Sean Anders really just does not get there, despite his repeated attempts.  That said, at least his scene in this film involving the guys going to prison to meet up with the villain from the first film ends up less uncomfortable than a similar scene from 22 Jump Street earlier this year. 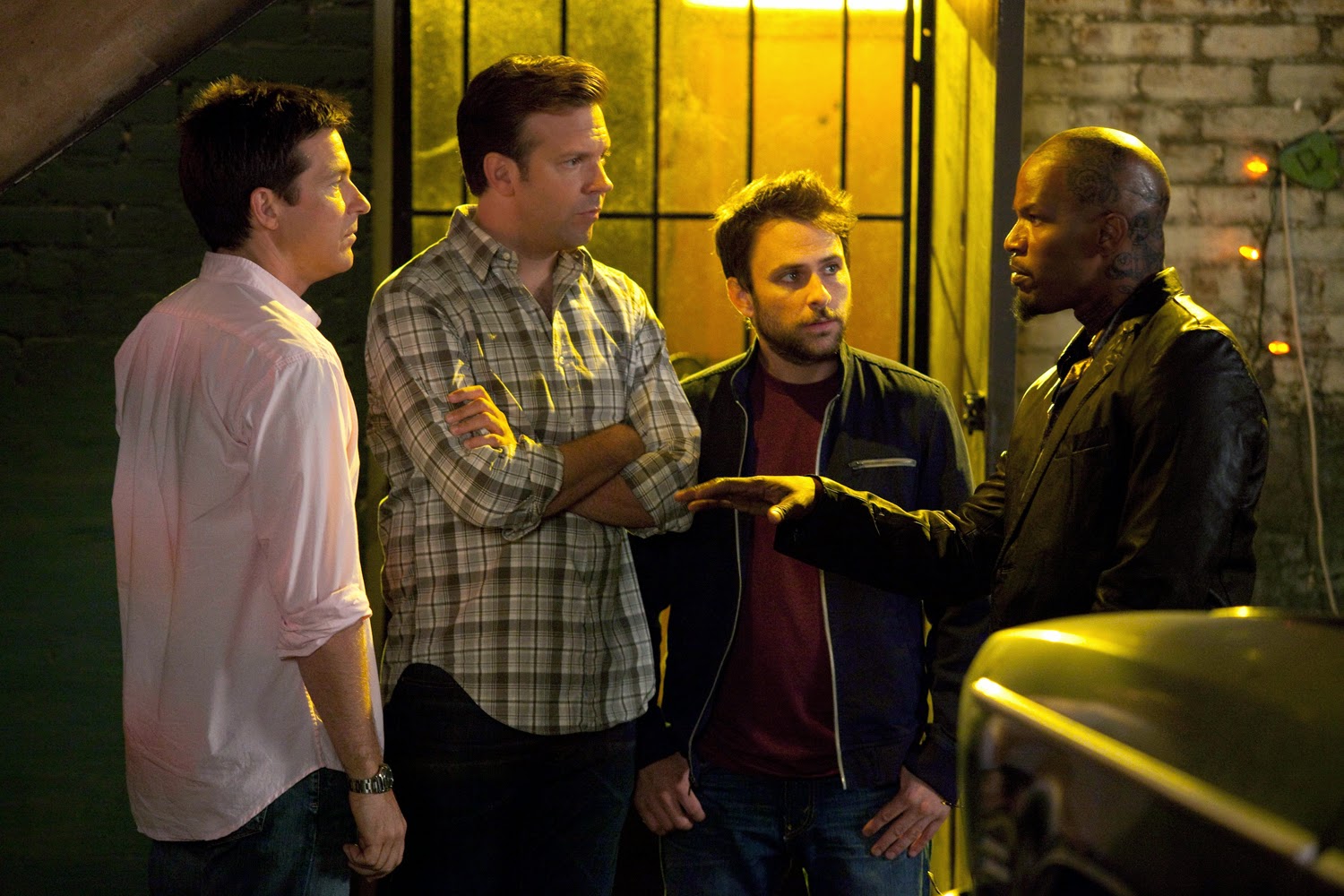 Keeping all of this in mind, I have no real desire to completely write off this film.  For the most part, I did find myself smiling along with it.  The various hiccups here or there did not keep me from having a good time, they just felt like highlights of a problem that kept occurring.  Given that I did not see the reason for this film to exist, it is something of an accomplishment to know that everyone is basically coasting on the success of the first film and still managing to make me laugh, but then again, it is a good cast, whether or not all of them really went all in.  There may be an issue that revolves around a lot of the gags fitting into separate sketch-type scenarios, rather than a sustained level of comedy, but once again, I was mildly entertained throughout its (slightly overlong) running time.

Far from painfully unfunny, Horrible Bosses 2 goes very far in keeping the jokes coming.  There is an issue involving the level of rape jokes and how to properly make that kind of material work, but at the same time, the film is at least not being mean-spirited in how it tries to create humor, which is also a tricky line to walk.  Best of all though, Bateman, Day, and Sudeikis are funny guys and they get in a lot of funny moments that will easily make fans smile at the least.  This film does not make it onto the short list of amazing comedy sequels, but it also stays away from being dead on arrival, which is good for a film that didn’t need to happen.

[Final note: Kevin Spacey has an extended monologue about balls, which is the kind of sentence that obviously makes me writing this review all worth it.]

Nick:  Well, you go there and I’ll just go to the men’s room for a minute.
Julia:  You’re quite welcome to do that on me…
Myself: *Shudders* 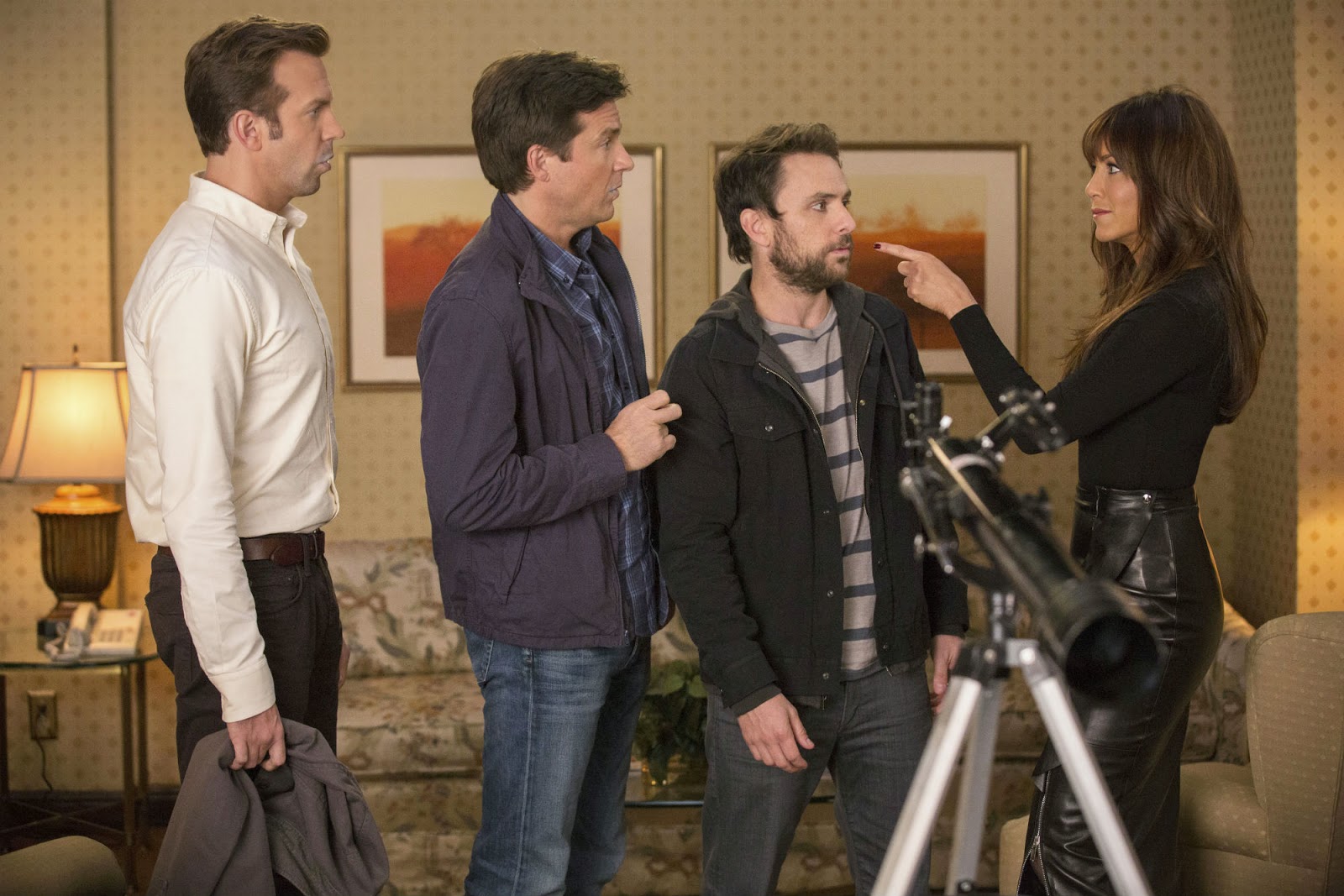 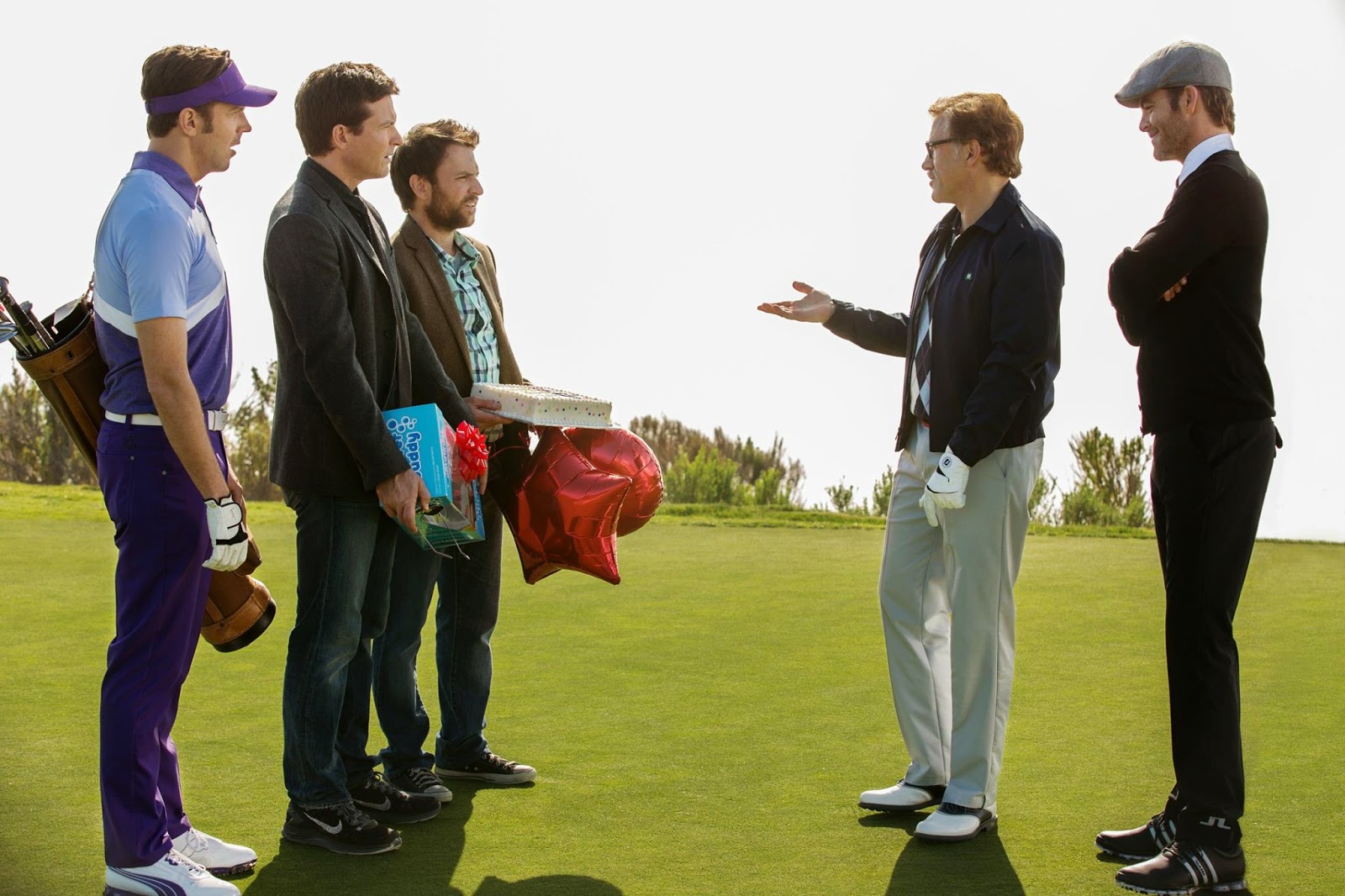