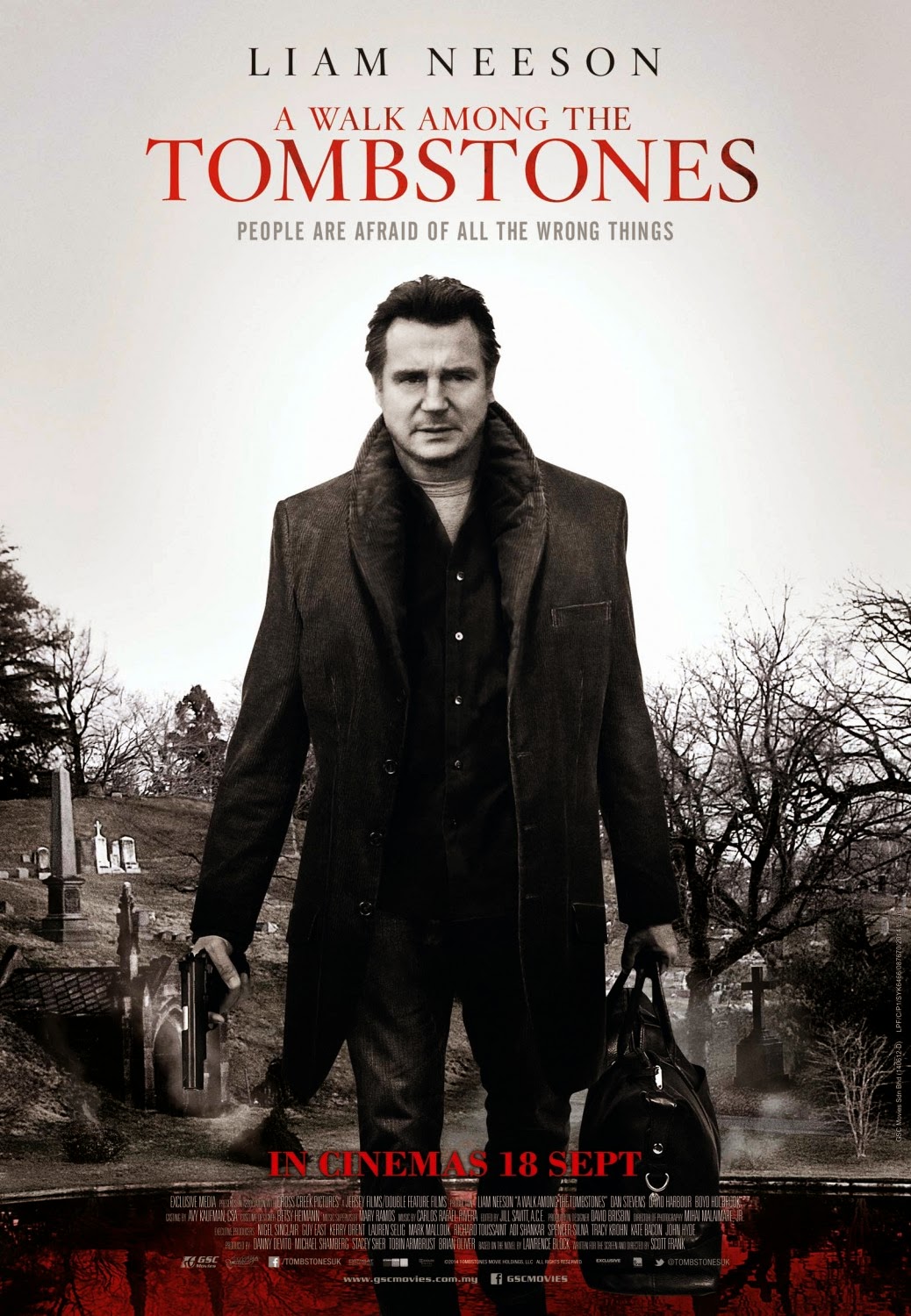 A Walk Among The Tombstones: 3 out of 5

Matthew Scudder: Sometimes I do favors for people.

A Walk Among the Tombstones is a nice change of pace as far Liam Neeson’s career as a B-movie action star goes.  While the film may be sold as another chance to see Neeson use a particular set of skills to beat up some bad guys, it is really more of a detective story that flirts with noir-ish elements, with some grisly thriller aspects thrown in for good measure.  Based on a series of novels by Lawrence Bock, which is focused on the character Matthew Scudder, Neeson’s performance not only keeps this film together overall, but establishes a new potential franchise, which would be more interesting than watching him rescuing various kidnapped members of his family from European gangsters over and over again. 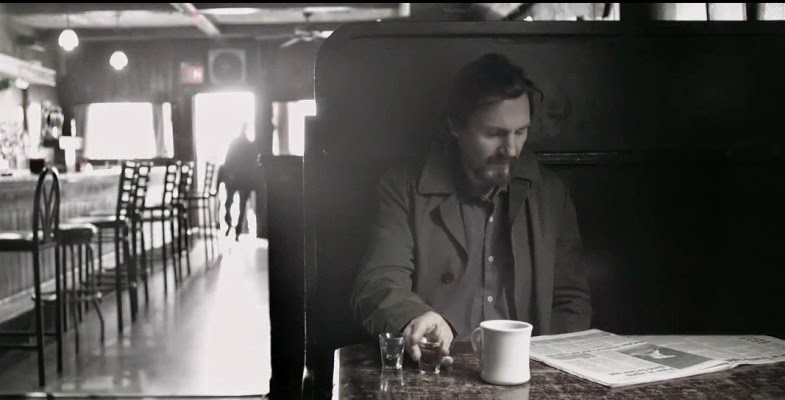 Keeping Taken in mind, it is not going too far off to see similar aspects between that film and A Walk Among the Tombstones.  Both actually involve Neeson handling a kidnapping, although this film does not make the scenario personal to Neeson, but does present him as a man who has fallen from great heights, choosing to now go about business in a reluctant, yet effective manner.  Matthew Scudder was a former detective, who retried, following an event where he managed to kill some thieves while drunk.  Scudder’s sobriety is most definitely a huge factor in this film and it allows for a Neeson performance where he can show experience and his own intimidating demeanor, without necessarily going into action, if he does not have to.  A scene about a third of the way into the film provides the perfect example, as Neeson is basically challenged and able to keep things from escalating to a place where they do not need to go, simply because Scudder speaks with a level of confidence that Neeson can easily provide.

Neeson’s work as Scudder is important to this film, as the actual story is fairly familiar and predictable.  Scudder is an unlicensed private detective, brought into a case involving a drug dealer, his kidnapped girlfriend, and some nasty guys who only want to kill, steal money, and do terrible things to innocent people.  Tasked with finding these guys, Scudder spends a lot of the film walking around and asking questions.  He does not necessarily get in over his head, but there is always the potential for someone to get roughed up or worse. 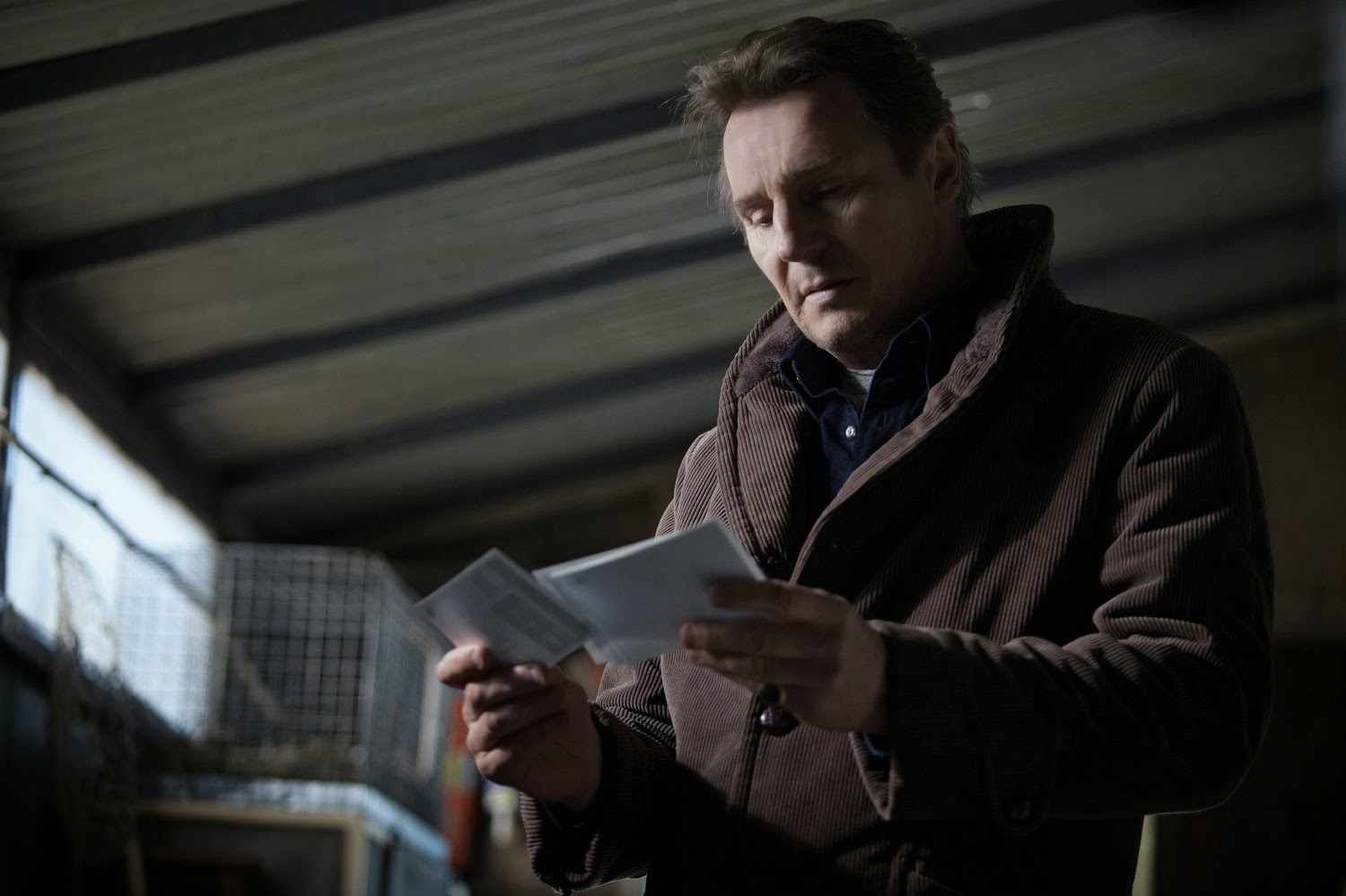 The film is pretty stripped down overall.  This is quite evident by the setting; not the place, but the year.  A Walk Among the Tombstones is set in 1999, with lots of evidence on Y2K panic. That may allow the film to find a way to utilized its tagline, ‘People are afraid of all the wrong things,’ but really it works to keep this film away from cell phones and internet, which would make solving the mystery aspects of the story too simply.

There are a few side stories that end up connecting to the main arc, which is not much of a surprise and even in terms of casting, this film seems pretty limited.  Compared to the other Liam Neeson B-movie from this year, Non-Stop, which had Julianne Moore, among other bigger names, this detective thriller is clearly the Liam Neeson show, as the other actors, while decent enough, are composed of a lot of lower-level character actors that are not as familiar.  I would imagine that has to do with a lower budget that could allow for the R-rating.  A Walk Among the Tombstones is the kind of film that seems to be taking its violence seriously, based on the first scene in the film, but later lapses into more traditional action-fare (shootouts and tough guy fights), which is part of why I cannot give a higher recommendation to the film as a whole. 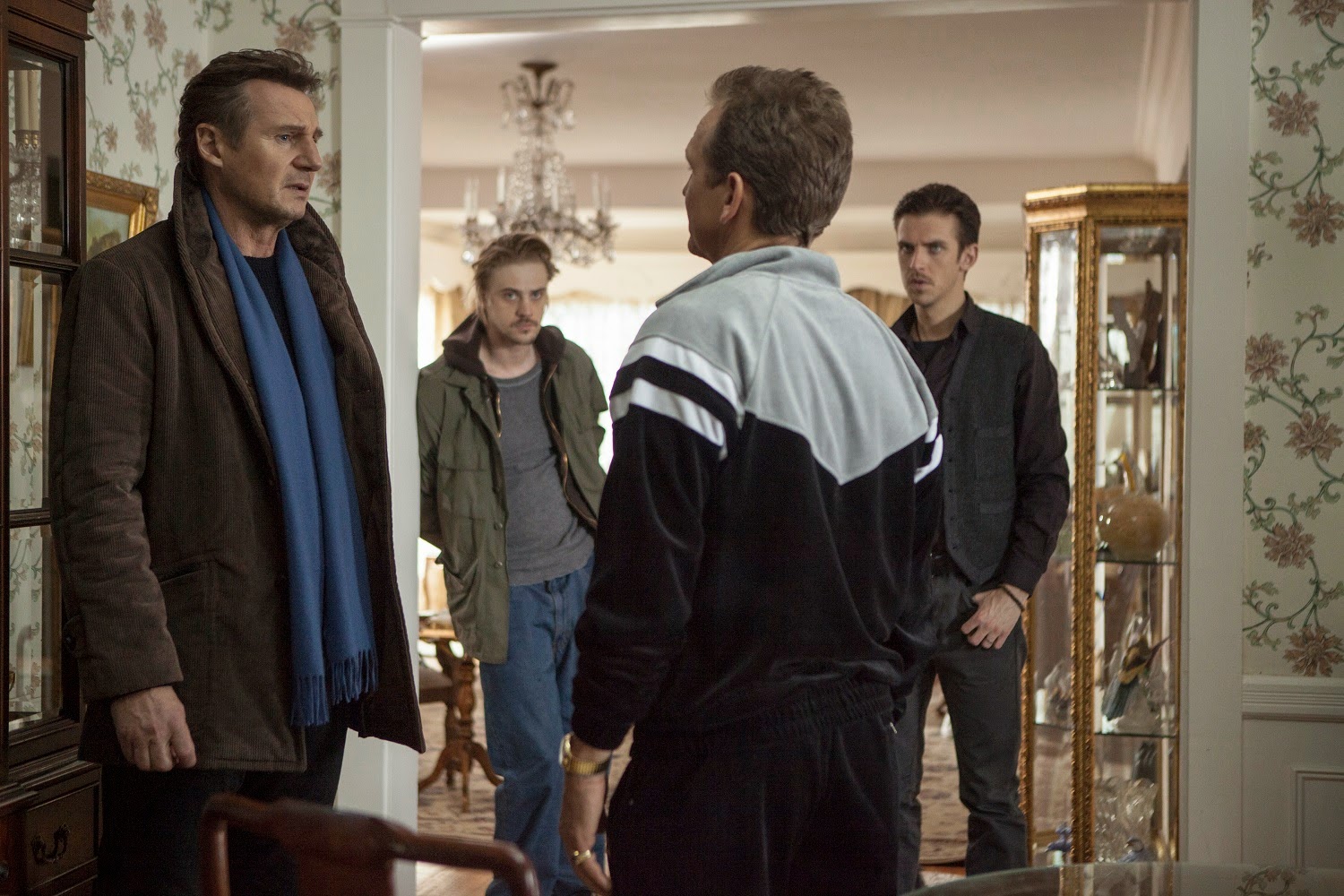 It is a shame that the film does feel a bit overlong and too happy to embrace a more action-heavy finale, as I was enjoying this film quite a bit for how laid back it was in its approach.  This story was adapted and directed by Scott Frank, a filmmaker I like quite a bit, based on his involvement in other crime films, including his directorial debut, The Lookout (well-praised, but underseen).  While A Walk Among the Tombstones is not as tight as it could be, Frank does continue to show plenty of promise as a director, as his visual approach and some use of juxtaposition late in the film worked just fine in communicating the tone this film wanted to achieve.

The tone is a key aspect of this film, as there is a supporting character, TJ (Brian “Astro” Bradley) that serves as a source of humor and proof that Scudder has a heart, which is a tricky sort of aspect to contend with for a film of this nature.  Amidst the drama involving some psychopathic killers in the city, TJ is this young boy that Scudder befriends and opens up to.  Not helpful is how obvious this character seems and how Bradley has little control over making this role seem more authentic, as opposed to very written.  Still, along with this example, the whole film has a way of allowing Neeson to be both the most serious man in the room and a character who is familiar with the very story he is in, so he can subtly play amused in a sense, while dealing with his opposition. 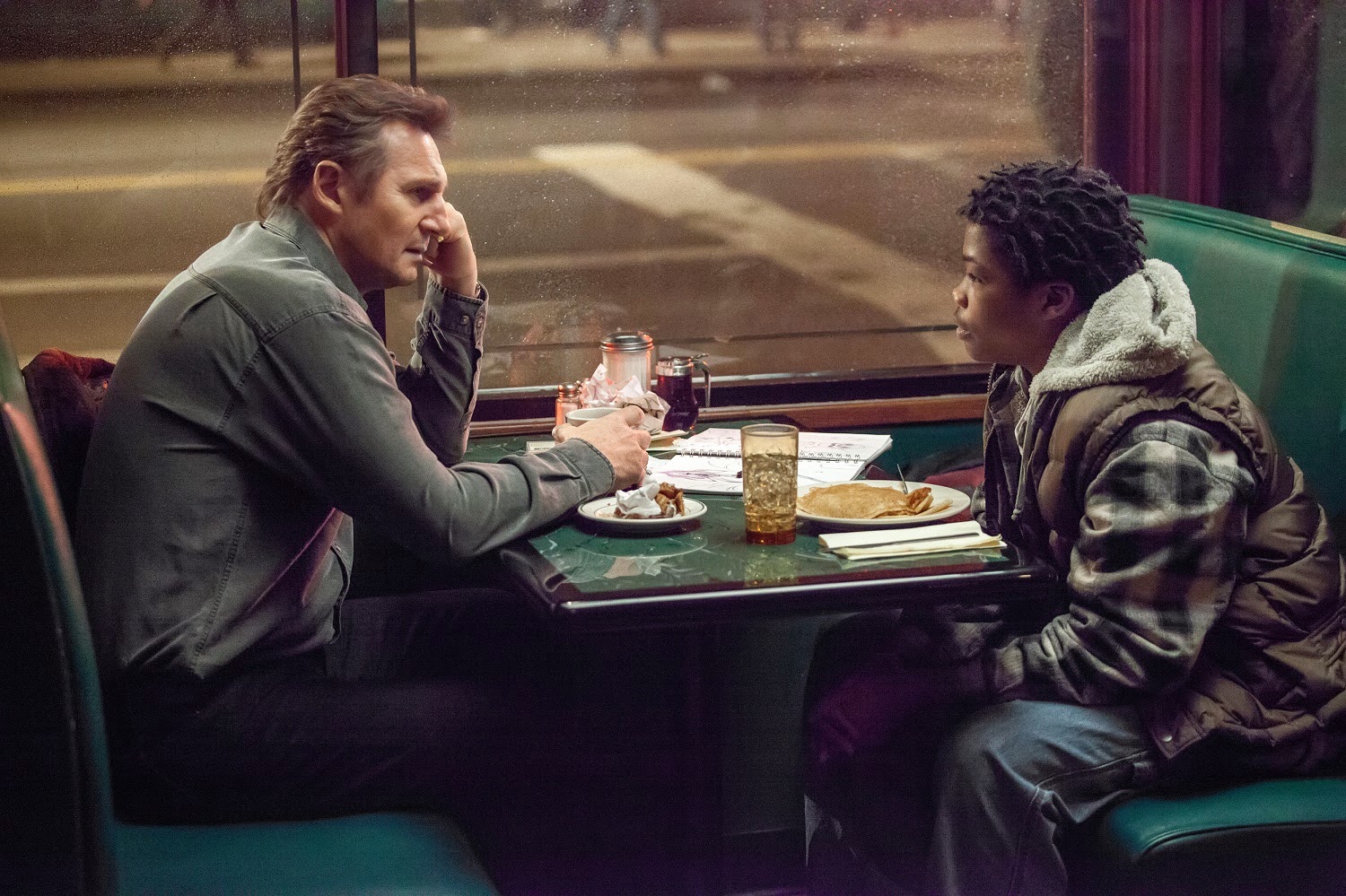 A Walk Among the Tombstones rides the line of being too generic, as opposed to just fairly traditional, but Neeson is also too good in this role for me to undersell what is a mostly well done detective story.  It gets a little nastier that I expected, but it also has a little more humor than I expected as well, without being funny in the way that Neeson’s more over-the-top B-movies have been (I’m looking at Non-Stop again in that regard).  The film is made with a nice level of confidence and works as a thriller and a redemption story of sorts that is suitable enough for those wanting a little more from Liam Neeson.