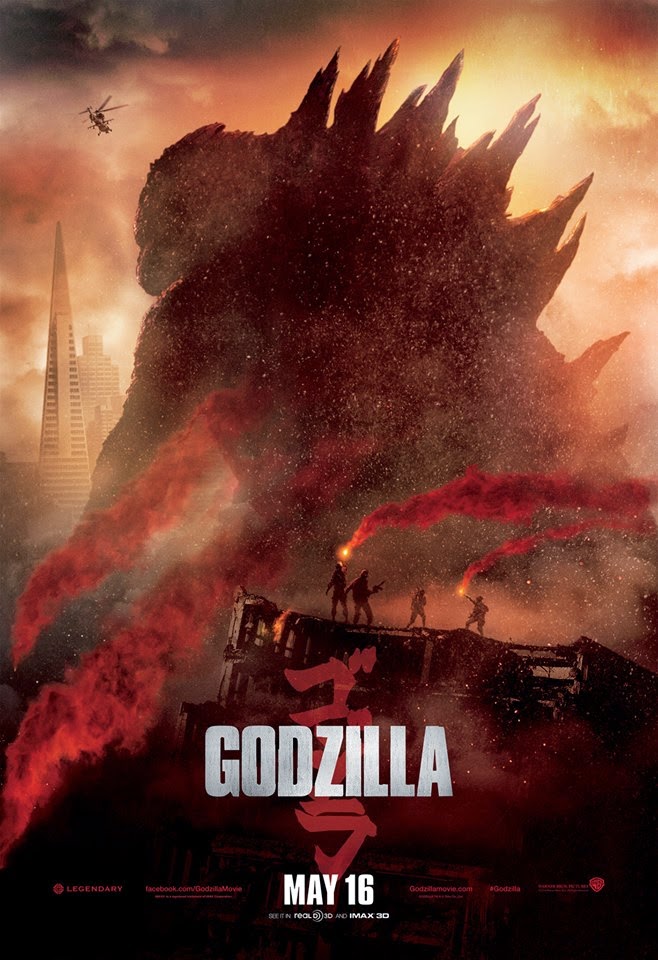 Ichiro Serizawa:  The arrogance of man is thinking nature is in our control and not the other way around.

It is great to see a movie like this treated with a level of respect.  While Godzilla can be boiled down to a giant monster causing a rampage in a city, the fact that the film (as well as its marketing) has a level of restraint in how to actually depict the sort of chaos that comes with this sort of film territory is impressive.  This new Godzilla movie has a lot more in common with a disaster movie than a science fiction/adventure story, but it respects the legacy of the 60-year old franchise.  The film is incredibly satisfying in the way it confidently builds up to huge reveals, maintains a level of pacing fitting of the more memorable summer blockbusters, puts a great deal of faith in letting the atmosphere enthrall its audience into the story, and still be a lot of fun to watch.  While the human-based drama leaves something to be desired, this is easily the most enjoyable Godzilla film since 1989’s Godzilla vs. Biollante.

Something very satisfying is how Godzilla is a film that is pleased enough with the concept of ‘build up’ to make you wait close to an hour before we really find ourselves gazing upon Godzilla and it is rightfully an audience cheer-worthy moment.  The film begins in 1999, establishing that something has emerged from a Filipino mining quarry.  We later find that whatever this thing is, it has decided to make its way to Japan and cause enough destruction to keep it linked to the Brody family.  Cut to 15 years later, Bryan Cranston (easily the film’s MVP on the acting front) is Joe Brody, nuclear physicist-turned conspiracy theorist, bent on learning more about whatever it is the government is hiding.  Aaron Taylor-Johnson is Ford Brody (a name much cooler than his character), an explosive ordnance disposal technician who finds himself in the path of pretty much every monster on earth.  There are other characters as well, but they matter little, because, as Ken Watanabe’s scientist character emphasizes, the real star should be Godzilla, who intends to bring balance back to nature.

While there is actually more screentime given to Godzilla’s opposition, providing a new perspective on the old saying that, “a hero is only as strong as his enemies,” the film effectively tries to convey the weight that comes not only from the massive size of this creature, but also from the very notion of his existence.  Godzilla should not exist, but it does and there is an appreciation of that fact that is not lost on the people involved.  It does not lead to constant jaws being dropped, because there would be no way to conduct a movie if that were so, but much like a disaster film, it does call everyone to action, with the film finding a way to balance its various characters up to a point.  In lesser films, this may not work as well or a decision to develop more melodrama or make some humans out-and-out villains, due to a lack of confidence in other aspects of the film may have been applied, but screenwriter Max Borenstein and the others involved in developing this take on the film inspired by the Toho franchise (which has been more than happy to feature generic human storylines in the past) put the effort in to keep a decent amount of focus on idea of characters in a film observing a real life spectacle and making that fun. 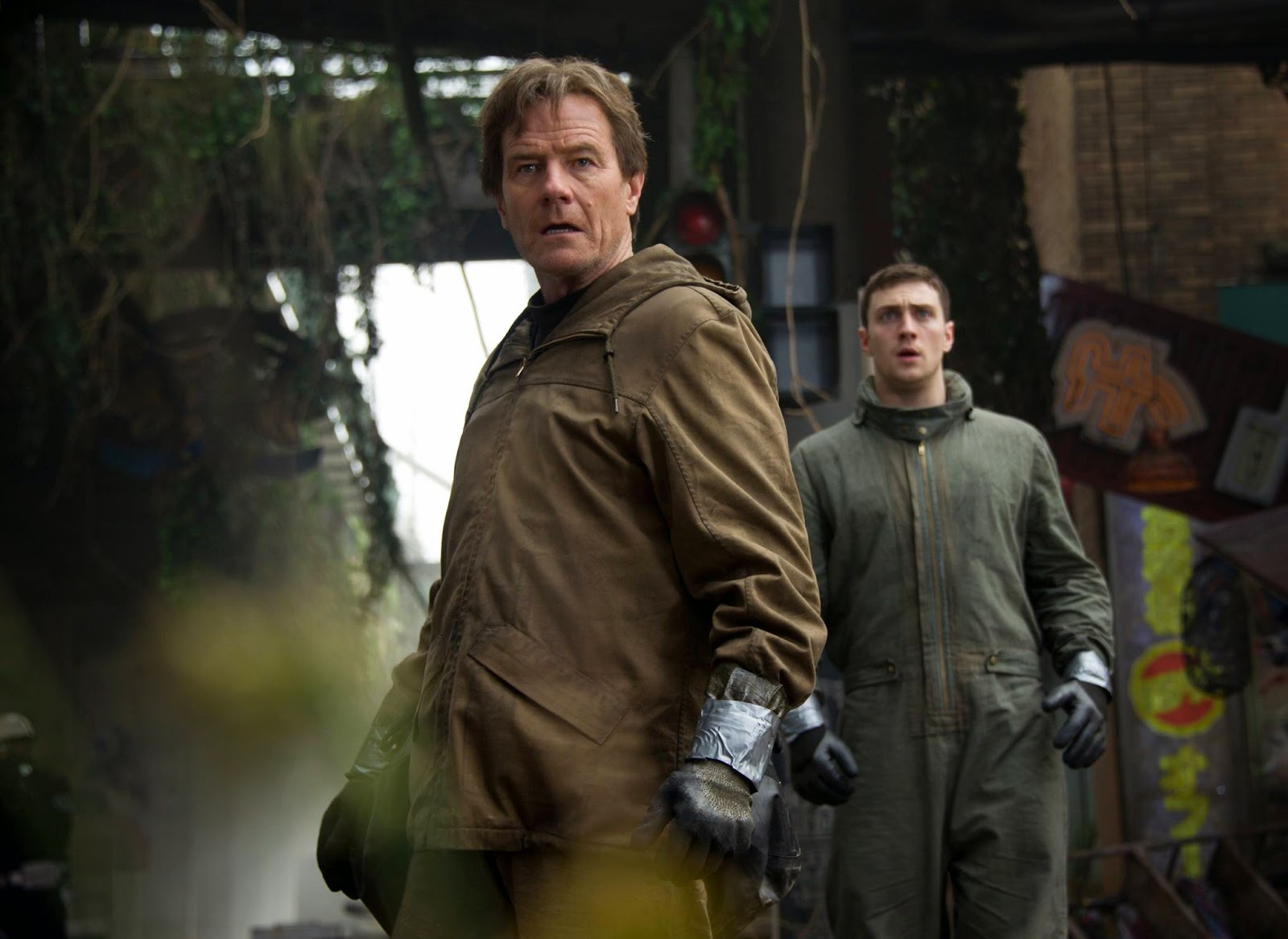 2014 logic dictates that audiences use to a certain level of spectacle would rather not see a camp-heavy Godzilla film, if the studio involved intends to make hundreds of millions of dollars.  Still, there are many ways to create a fun kaiju movie, featuring a monster as popular as Godzilla.  1954’s Gojira was a somber take on the monster movie genre, using fear and the atomic age as inspirations for a film that served as a parable.  Later films would back away from the social commentary and simply feature the giant beast rampaging and occasionally facing off against fittingly large challengers.  Eventually, the King of the Monsters became more or less an anti-hero, defending earth (while still stomping all over a lot of it).  Some of the films went for some interesting subtext, but most didn’t.  For this 2014 Godzilla, director Gareth Edwards mostly stays away from deeper themes and motifs, but he makes up for it in his direction.

Staying away from questioning the morality of nuclear war, Edwards is much happier letting characters gaze upon the situation as if they were watching mythical Olympians duking it out amongst the much smaller, human folk.  It is easy to look at Godzilla and see how it swerves away from creating deeper characters in favor of delivering on spectacle, but I also see little need in really wanting to learn more about these fairly average people.  Getting to see a film like this that may not have the most complicated of individuals, but still allow us to see towering drama unfold from their perspectives, for the most part, is incredibly effective and more than satisfying in terms of letting us know all we need to know about what matters in this film.  One could even argue that a lot simple character work is purposefully done, reflecting much of what we find Ken Watanabe’s character to be spelling out to us.  In the grand scheme of things, we may want to believe we are what is most important, but just because it may be easier to relate to some engineer guy over a giant monster, does not mean I need to invest myself in his life story.  Sometimes one has to just let the monsters fight, but even with that, Edwards applies much of what worked for his approach to his 2010 low-budget debut film, Monsters.

Plenty of money was likely handed out for a film being spearheaded by a director with one, much smaller film under his belt, but one can see how Edwards has grown in a way that has him confident in playing in a much larger sandbox, even if learning the ways of effective human drama may take a bit more time.  Most notably on a filmmaking standpoint, Godzilla manages to come off as a kaiju movie with a lot of Spielberg-ian influence.  While a film like Super 8 ran into issues based on J.J. Abrams attempts to be a Spielberg film, Edwards has found a way to capture the essence of films like Jaws and Jurassic Park and apply them here.  This is why we get so much build up, why key events are viewed from afar at times, why the atmosphere feels so rich, and why the truly big money shot moments feel so well-earned.  There is a level of craftsmanship here that should not go unnoticed, especially in the realm of rapidly edited action fare, providing little time to appreciate the small details.

I could speak more about what really works in this film, such as Alexadre Desplat’s score that hits just the right notes to convey the appropriate tone or the expectedly great CGI used to show the gargantuan nature of the monsters that battle each other in various cities, but the simple fact is that Godzilla is a carefully constructed spectacle film that succeeds.  What it lacks in true depth it more than makes up for in not just the joy of seeing Godzilla fight monsters, but in the approach to seeing such a display.  This Godzilla film finds a way to present the King of the Monsters to a modern audience, with traditions akin to the blockbusters of the past and the present, and I was very happy to be in awe during much of the film’s runtime.

Joe Brody:  You have no idea what’s coming!