‘Olympus Has Fallen’ And A 90s Action Movie Rises 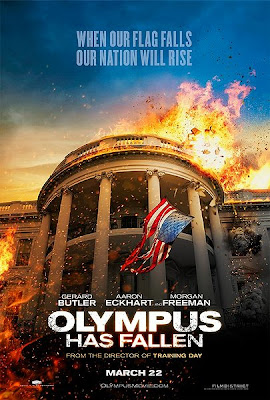 Mike Banning:  With all due respect, I’m the best you’ve got.

It is funny how some movies strike me differently than others, despite their similarities.  Olympus Has Fallen has all the jingoism, xenophobia, and silliness to match awful films like Red Dawn or Red Tails.  It is also cheap and ugly enough at times to match an awful film like A Good Day To Die Hard.  There is a ton of violence to outdo sub-par films like Act of Valor or Taken 2.  Pushing all of this aside, sometimes you get a movie that is all of these things, but still entertaining, like Lockout Space Jail.  Olympus Has Fallen sits in line with many other silly, yet very serious action films, but it works as another entertaining Die Hard knockoff. 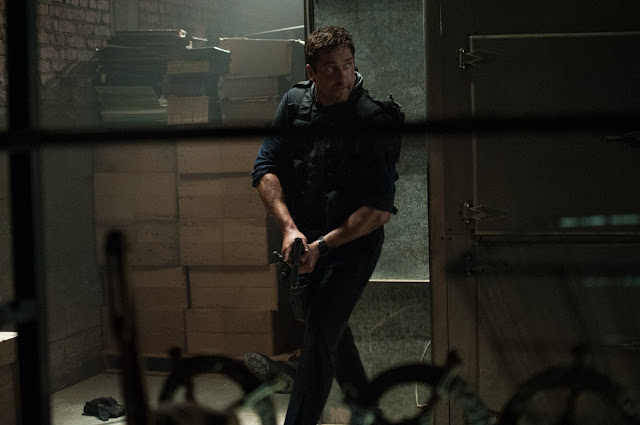 Gerard Butler stars as former Secret Service agent Mike Banning.  Banning was taken off of Presidential Detail after a tragic accident that led to him saving the life of President Asher (Aaron Eckhart), but at the cost of the life of the First Lady (Ashely Judd).  18 months after this event, the White House is suddenly attacked by a group of terrorists, who managed to successfully take the President and other members of his Cabinet as hostages.  Banning was witness to the initial White House attack and managed to hurry over and provide support, only to find himself trapped within the building, amidst the bodies of dead men who tried and failed to prevent this takeover.  It may just only be unfortunate for the terrorists, however, as Banning is a former U.S. Army Ranger and the only hope the president has.

The film’s cast also includes Morgan Freeman as the Speaker of the House, who becomes acting President during this attack; Rick Yune as the terrorist mastermind; Angela Bassett as the head of the Secret Service; Melissa Leo as the Secretary of Defense; Robert Forster as the General, serving as an advisor; Radha Mitchell as Banning’s wife; and Dylan McDermott as a former Secret Service agent.  Suffice it to say that all of these characters serve their expected purpose in the film, but they are played by a genuinely solid group of actors…and Rick Yune. 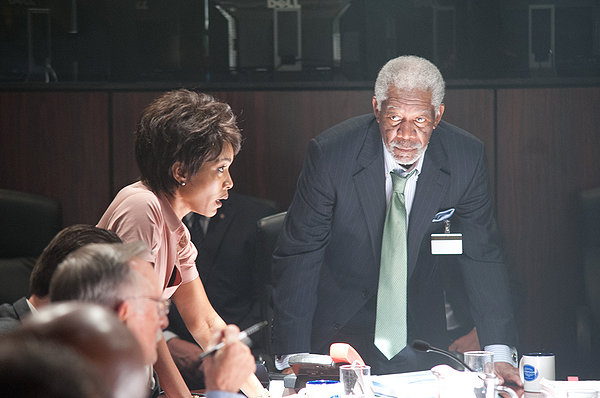 Olympus Has Fallen was directed by Antoine Fuqua, who is best known for directing Training Day, but has made a decent action filmography with films like The Replacement Killers, Tears of the Sun and Shooter.  While Fuqua may not be a director I get super excited about, I do recognize his skill when it comes to action directors who I would praise over other, similar directors that tend to rely on too much choppiness to keep things coherent.  While the film has issues with its budget that make scenes relying on a heavy amount of CG seem cheap and the film is shrouded in too much darkness at times (the White House’s power is out, of course), I still think there are a lot of commendable qualities in regards to how the action is shot.  The viewer is put into the moment fairly effectively, regardless of whether it comes off as intense or darkly humorous.

With that said, the action in this film is brutal.  It is not so much that the violence is over-the-top and more so that it is portrayed in a very excessive manner.  True to Fuqua’s other films, Olympus Has Fallen makes no qualms about being a very serious action thriller.  This means that the film may have brief moments of levity (let alone times where the viewer may laugh at the absurdity), but it is very much rooted in taking things as deadly serious as possible.  The film is R-rated for a reason, as it is fine with showing its audience loads of agents, terrorists, and civilians (men and women) getting gunned down on and around the White House lawn and Pennsylvania Avenue.  Additionally, both Banning and Yune’s terrorist leader character do not hesitate when it comes to using brutal force to get what they want out of a situation. 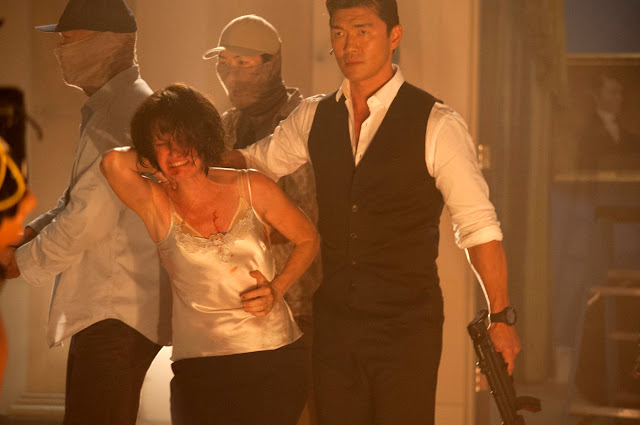 All of this feels very 90s, which I mean in a positive way.  Olympus Has Fallen is very unapologetic for the type of film that it is.  It is rooted in being a film that celebrates the ‘strength of America’, so much so that we are reminded with several shots of the American flag, whether it be soaring high or riddled in bullets.  It takes no issue with presenting us a threat that is entirely comprised of evil and unlikable North Koreans (and one traitor).  Basically, it comes from another time, when the setup was simple and the enemies were clear.  It follows the “Die Hard in a ___” model that was very prevalent during the 90s and led us to a lot of fun films like Speed, Under Siege, Sudden Death, and Air Force One of course.  It is actually surprising that the concept of ‘Die Hard in the White House’ was not done much earlier, but now we have this film, along with another one, White House Down, arriving in theaters this summer.  Having said that, at least this film actually feels like a Die Hard movie, unlike that February movie that had “Die Hard” in the title, but didn’t turn out to be anything like one.

There is one factor that I can see others using as a big knock against this movie - its lack of irony.  Olympus Has Fallen certainly does not need to be Hot Fuzz-like in its approach to action movies, nor does it have to have any sort of self-awareness, given that it is all about bland patriotic sentiment and serious violence, but the times have evolved regarding how audiences accept action movies.  Because of that, this film may be deemed to have a very dated feel, given how predictable not just story beats are, but actual lines of dialogue.  It is somewhat refreshing in a way, given that you do not see these hardcore, R-rated action flicks, as often as you see the choppier, PG-13-cut action flicks and of course superhero films.  The most innovation seen in this film actually comes from the restraint in not succumbing to more predictable clichés, given certain supporting characters we are introduced to.  So it is really a give and take, depending on how one accepts a movie like this. 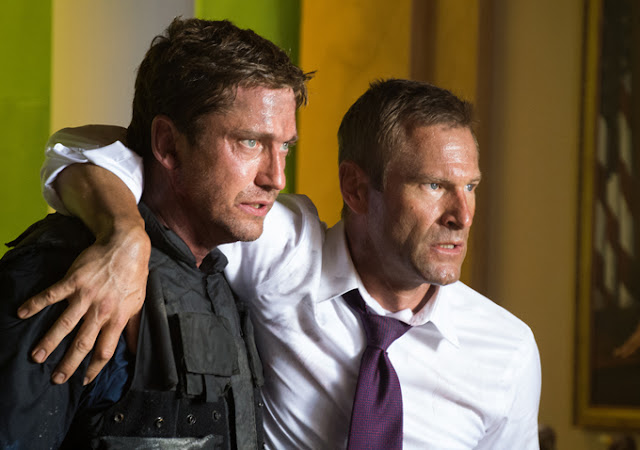 Acting-wise, most of the stars fall victim to playing types, succeeding in some sense, depending on their commitment to the role.  Gerard Butler is a guy I like to watch in action roles.  Given that he had a couple misfires recently, I was happy to see him back in action hero mode.  His charisma may come from efficiency in brute force, rather than smarmy one-liners, but I like Butler nonetheless.  Aaron Eckhart is a likable guy, even if he only gets to be locked up and looking on in terror for most of the movie.  Morgan Freeman does seem invested in his role, as there is a nice balance of concern and confidence, after being placed into the role of the leader.  Given that Freeman could have just coasted, I was quite pleased with this.  The only other standout is Melissa Leo, who really gives it her all in a role that really only requires one thing.  She takes a beating and lets you feel it, which does a lot to keep you invested in what the film is aiming for.

Something I admire about Olympus Has Fallen, overall, is how it is pretty go-for-broke in its intentions.  It raises the stakes to impossible levels and requires characters to go to ridiculous lengths in order to do what they need to do.  That is mostly where the entertainment comes from for me in this film.  It is ludicrously entertaining for me at times and not because the film wants me to laugh at it, but is effective, nonetheless, in getting a reaction out of me.  It has strikes against it regarding the film’s overall look – sometimes cheap, sometimes dark (thankfully this is not in 3D), but it also feels like a competently made (and very violent) action picture.  Olympus Has Fallen is silly, crackerjack entertainment, for a film that is rising out of the fire of a bygone action era. 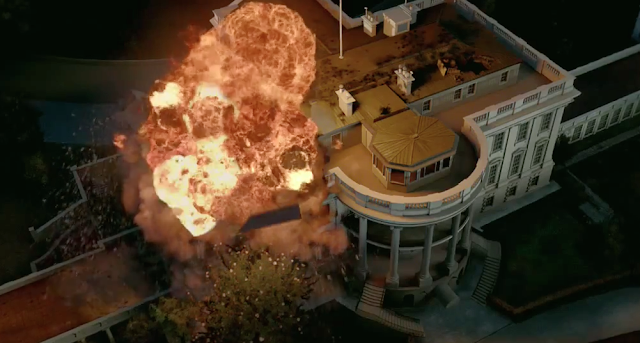 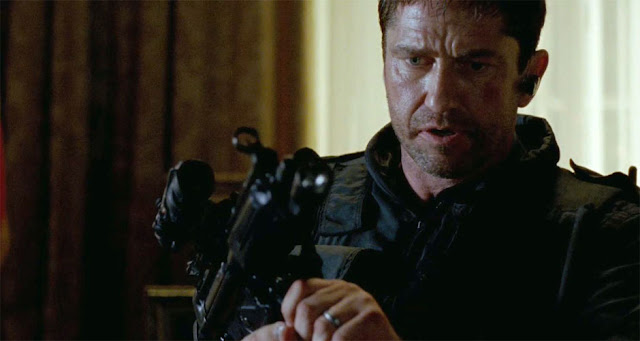