‘This Is 40’ Features Lots Of Laughs And Unrelatable Problems 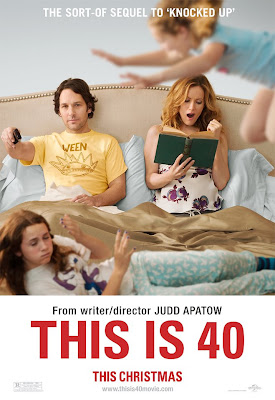 
I am not sure how concerned with my own age I should be when thinking about This Is 40, but I can say that I have doubts that Judd Apatow’s new film about a couple with two kids living in a mansion in LA, facing financial issues, because Paul Rudd’s record label is not doing too good is going to relate to too many other people either.  It is a purposefully biting opening remark, but it is the biggest flaw of the movie.  Its other flaw is how there seems to be so much material here, which could almost be spread out into a one season-long TV series, but instead the film just has many lingering plot threads.  Putting all of that upfront, I will say that I did laugh quite a bit too, which puts the film in a weird middle-ground for me.  It has likable qualities, but this is supposed to be a mainstream comedy and Apatow’s free form approach to plot structure really is not helping this time around. 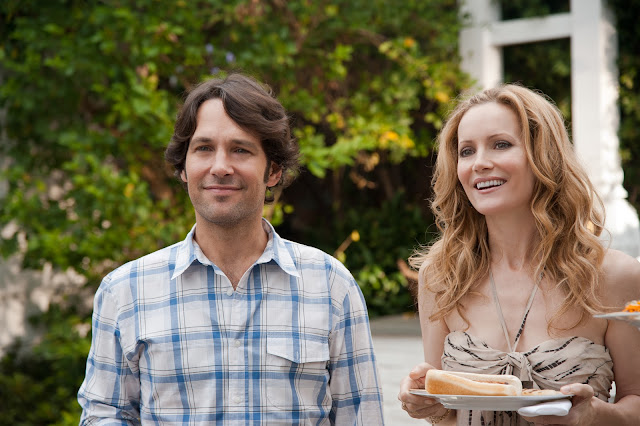 This Is 40 takes place five years after the events of one of Judd Apatow’s previous films, Knocked Up, but this time follows the characters of Pete (Paul Rudd) and Debbie (Leslie Mann).  For those who are unaware or forgot, Debbie is the sister of Katherine Heigl’s character in Knocked Up, and she was married to Pete, with two kids – Sadie (Maude Apatow) and Charlotte (Iris Apatow).  In terms of their dynamic, not a whole lot has changed.  Pete and Debbie are constantly fighting, but do seem to genuinely love each other.  The film follows these characters for about a month, as both Pete and Debbie are now turning 40 and continue to deal with the stresses of life, which includes their parents (their father’s show up, played by Albert Brooks and John Lithgow), work (Pete’s record label is failing), their kids (Sadie is growing up), and each other.

If there is something to admire, it is the fact that writer/director Judd Apatow does not seem to want to compromise his own vision.  His last film was Funny People, which had its share of troubles and flopped at the box office, but also provided Adam Sandler with the chance to give one of his best performances.  While the disappointing returns led to Sandler going back to doing the very films that he was satirizing in Funny People, Apatow has stuck to his guns and continues to make movies that feel overlong and overly improvised, without the feel of a more cohesive story, but are still sentimental and fairly clever at times.  I get that he has chosen to do what he feels is best to create a touching comedy-drama, but I also feel that I have reached a breaking point with his style. 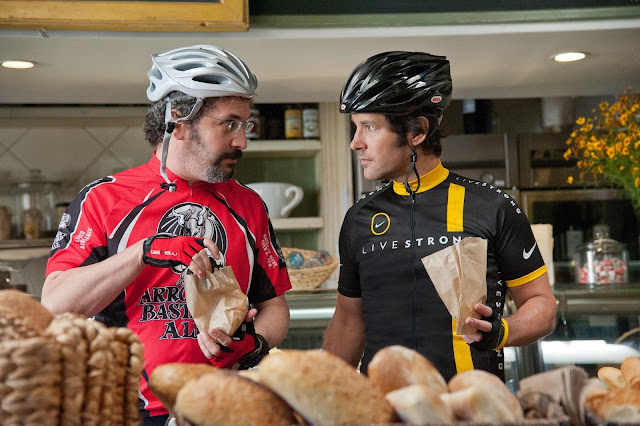 Not helping is the basic setup of the film and the way certain events play out.  My key example:  We are told throughout the movie that Pete is having it rough with his record label and will probably need to sell his big house, so his family can get by.  He, of course, refuses to tell Debbie about this, but during the film, because the two fight so much, we get to see them make a decision to go on a vacation for a weekend, at a lavish hotel in Laguna Beach, CA.  Once there, we watch them buy tons of room service for their luxurious hotel room, while they fool around with each other.  Really?  It is as if I was missing something that justified this 15-minute excursion of the film, which could have been taken out and fixed a lot of the film’s problems all together.

This is partly why this film feels like another one of Judd Apatow’s TV shows that could have received a fully fleshed out season for people to enjoy, rather than one film that is so full of episodic moments and plot threads.  If a show like the cancelled, but cult-beloved Freaks & Geeks was instead a 140-minute movie, with a mish-mash of characters and plot-lines, it would not be nearly as satisfying.  This Is 40 does run into that problem and suffers because of it.  I won’t be surprised at the plethora of deleted an alternate scenes available on the Blu-ray for this film and I only wish that Apatow was a more judicious editor, when it came to shaping this one. 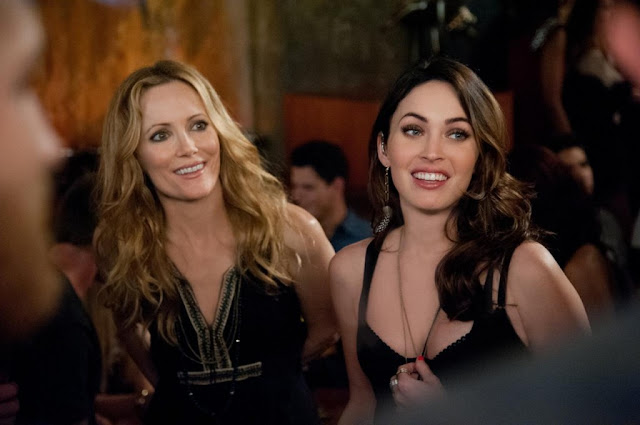 Looking past this, I certainly did not hate this film, as I did find myself laughing quite a bit.  Apatow and the actors he casts have a way of handling his writing and an improv style that I do find to be quite funny.  Along with the actors mentioned, this film does have appearances from Jason Segal, Megan Fox, Charlyne Yi, Chris O’Dowd, Lena Dunham, Rob Smigel, Michael Ian Black, and Melissa McCarthy, who all do their best to bring the funny to their scenes.  The heart of this movie does certainly belong to the core family characters, but there is a fair share of great one-liners and funny conversations scattered throughout this film.

I would say that the best work in this film comes unsurprisingly from Albert Brooks, as I do love that man’s comedic sensibilities.  Here he plays Pete’s father, Larry, who is constantly in need of money, because he remarried and had triplets (unexpectedly).  The way he interacts with his son has an interesting dynamic, because it is slightly absurd (which the movie generally is anyway), but still seemingly authentic.  Similar thoughts can be applied to Lithgow’s work as Debbie’s absentee father as well, though in a much more awkward and straight-laced manner. 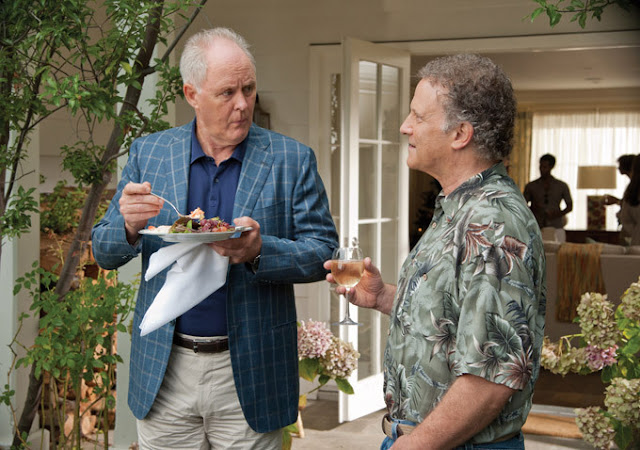 Since Apatow has decided to keep casting his children in his films, I guess I can address them as well.  I do think that Maude and Iris Apatow have a fun dynamic together, even as they grow older, but I can also tell that they definitely work best when they are together, as opposed to on their own.  Not to discredit young Maude Apatow, but her big scenes are only good because of the writing.  As for Iris, giving her a comedic punch line to end a scene does not mean she is the go-to answer for everything.  Given that I am practically attacking defenseless children, I guess it is time to wrap up.

This Is 40 is strangely appropriate, I guess, for the holiday season, as it is about family and their troubles in life, which is more honest than everyone sitting around a fire and drinking hot chocolate with smiles for days, but at the same time, with the smiles replaced by R-rated arguments, set in a big mansion in LA, I can’t say it will work for everyone.  Adding onto that, Paul “Charm Factory” Rudd is still steadily balancing the line between too smug and funny, while Leslie Mann is doing her best to not seem too shrewish as the female lead in her husband’s movie.  If you like their chemistry together, which could be true, given that a whole movie was spun-off for these characters, then you could perhaps enjoy this film, as long as you look past the way it meanders through its story.

Larry:  I love you, because you’re the fighter.  One person in the relationship’s got punch. 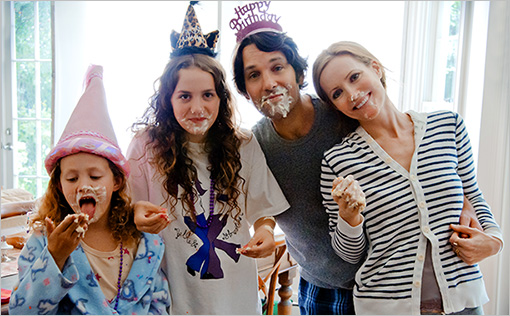