'Save The Date' And Enjoy This Film 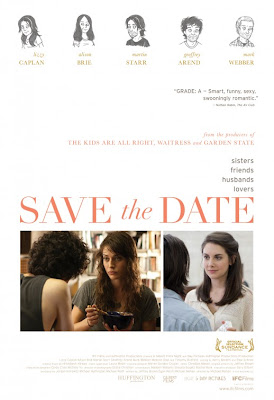 
[Note: This review was written back in May, 2012, while I was covering the Newport Beach Film Festival for WhySoBlu.com]

Wrapping up my work at 2012’s Newport Beach Film Festival, the last film I was able to attend was the romantic-themed comedy-drama, Save the Date.  Having just watched Lola Versus the previous night, I felt like I found myself more or less in familiar territory, except that Lola Versus took place amongst a hip bunch of New Yorkers, whereas Save the Date revolves around some of the exploits of a hip bunch of Los Angelinos.  It is another independent film that deals with a woman coming out of one relationship and finding her way into another, despite the fact that everyone still hangs around with each other, occasionally.  I can’t hold the film back for timing on my part, though I can be put off by the drastic tonal changes that take hold over the course of the film.  I appreciated the performances, as it starred people I liked seeing, but a lot of the warmth this film has is brought down by the required drama of a film of this type.  Regardless, it is the kind of film that I generally like when it comes to this familiar story and the film had enough in it for me to enjoy it overall. 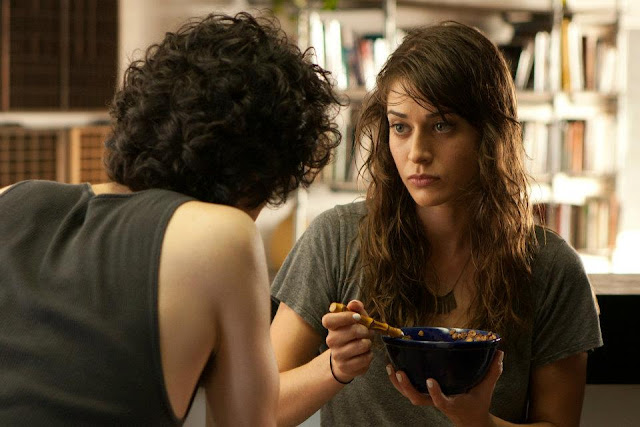 Save the Date stars Lizzy Caplan as Sarah, the manager of a bookstore and a somewhat aspiring artist, who is moving in with her boyfriend Kevin (Geoffrey Arend).  Kevin is the lead singer/guitar player in the band Wolfbird, with his best friend Andrew (Martin Starr) on drums.  Andrew is currently engaged and living with Sarah’s sister, Beth (Alison Brie).  Moving in with Kevin is a big step for Sarah, who has issues with the closeness of relationships, but things become disastrous almost immediately, when Kevin (very unwisely) decides to go for it and ask Sarah to marry him during one of his band’s performances, in front of a large audience.  Sarah declines, breaks up with Kevin, and moves back into her own place.

This fortunately comes as good news to Jonathon (Mark Webber), who has had a crush on Sarah (he visits her bookstore, not because they have the books he likes, but because she is there), and this leads to him starting up a relationship with her.  Meanwhile, Beth is dealing with sorting out her own wedding, while also trying to help Sarah along in her own romantic entanglements.  Things become tricky, as various forms of drama revolving around Sarah’s own issues with commitment put her at odds with the different people in her life who care about her most. 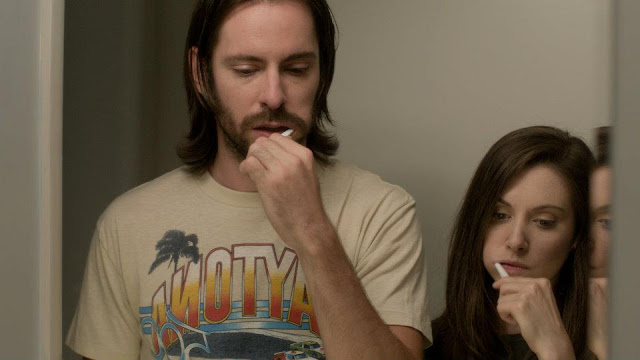 Having sketched out a plot, aside from a few details here or there, it is sort of easy to understand what kind of movie Save the Date is, how it will progress, and possibly how it will end for everyone.  The movie does not necessarily revel in clichés, but it does have a familiar structure.  What kept it a worthwhile feature for me, much like a number of the other recent and similar films that I have seen, is the strength of the cast.  This is a good group of people, with some cast members playing off of their charm, while others play off their sardonic sense of humor to great effect.

I was pleased right away to have Lizzy Caplan in the lead role in this film.  Given that I am a fan of hers in general (notably in the series Party Down, which also starred Martin Starr), getting to see a full length feature with her as the lead was a good way to get me into my seat.  I enjoyed watching Sarah for the most part, even though some of her actions became incredibly frustrating during later points in the film.  Having Alison Brie in this film (who currently pulls double duty on Community and Mad Men) was also a pretty nice plus.  She is in the role of the more responsible sibling, but gets to balance some of her overbearingness with chances to shine comedically.  Mark Webber (from Scott Pilgrim vs. The World, further proving that this film has a desire to truly please me) is also welcome, embracing him a role that allows him to have an effortlessly cool persona, which is washed over by the occasional nervousness that makes him into a generally likable guy.  Geoffrey Arend has the somewhat unfortunate task of playing the ex-boyfriend character, which basically means that we get just enough to know that he’s probably not right for Sarah, but not a whole lot more.  That said, he has a number of moments in this film that provide nice little bits of shading to his character, so we at least never see him as unlikable. 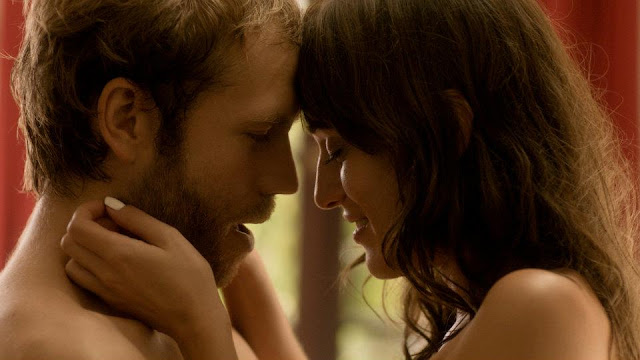 Two more performances of note.  The first is Timothy Busfield, who enters into the film a bit later as the father of Sarah and Beth.  I don’t know what it is, but in the few scenes he has, Busfield nails what is required of him and his purpose for being in the film.  The other is Martin Starr who I found to be quite fantastic.  He and Brie’s character play a very believable couple, who are clearly in love with one another, but have arguments just as well, and also have conversations that go well in strengthening who they are.  Brie is very good in her role, but I thought Starr really nailed his performance.  Coming off roles like Party Down, which I mentioned, or the underseen film Adventureland, I think it is clear that Starr is very capable in providing more than just a biting sense of humor to fill in with supporting character work.

The film itself is well made.  Sarah’s artwork comes into play, in a way that establishes a nice sort of quirky touch, fitting for this kind of film.  The various ways in which this film jumps into showing us time passing and the relationship between Sarah and Jonathon evolving is done well enough.  I do think the film goes into pretty heavy territory towards the end, which comes off as somewhat irritating, given the reason of why a certain level of darkness is being revealed, but for the most part, there is a fair share of humor that surfaces throughout.  The script by Jeffrey Brown, Egan Reich, and Michael Mohan (who also directed) is thought out enough to keep the film interesting and not too much is done to make the film seem overly hip with unfavorable “indie” notions. So I found myself enjoying yet another comedy-drama based around the romantic pursuits of a flighty female lead.  There is not much wrong with that.  Save the Date has a strong, likable, and funny cast and that really goes a long way for these types of movies.  The story goes through some familiar motions and does not quite nail the tone in a more consistent fashion, but I still was able to really enjoy myself, while watching this film.  And I also just really liked Sarah’s drawings.

So as I mentioned, Save the Date was the last film I saw at the Newport Beach Film Festival.  It was a fun, but exhausting week for me and I hope others are able to check out some of the film I managed to see and enjoy.  Click on the poster to visit the Newport Beach Film Festival website, and be sure to check back to Why So Blu throughout the week for more of my coverage of the festival! 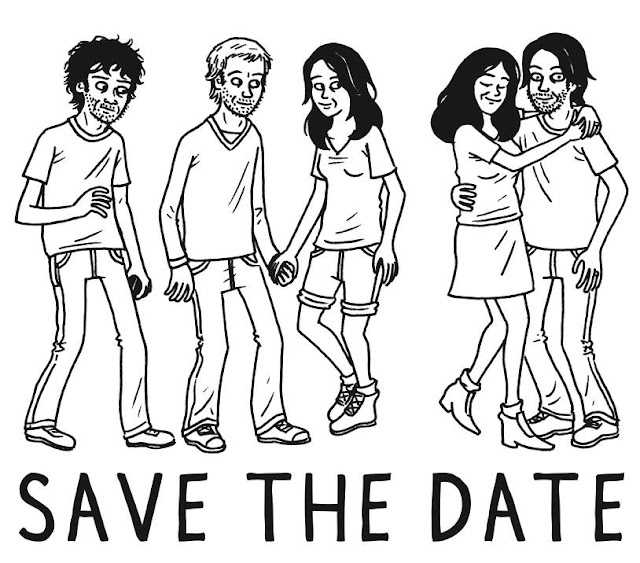 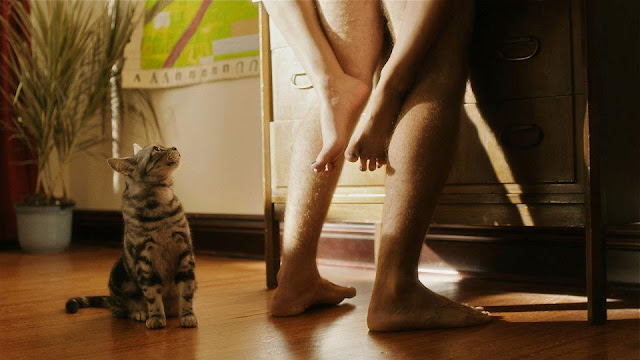