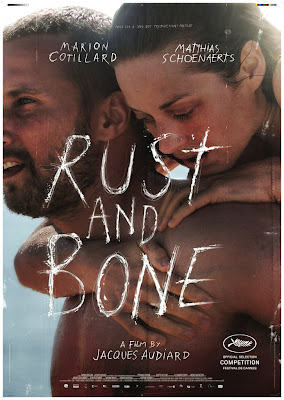 
Ali: A smart boxer knows everything flows off the jab: keeps your opponent at a distance and muffles his offence.

In a year that has given us the French comedy hit, The Intouchables (which I kind of liked) and David O. Russell’s Silver Linings Playbook (which I liked a lot), we have also been given the French/Belgian drama Rust and Bone, which is a fitting sum of each of those films’ parts.  It is certainly not a comedy, but instead a film about an unconventional romance formed by tragedy, which manages to subvert convention and contrived scenarios by becoming more complex in what is presented.  The bonus is that the two lead performances are fantastic, which is matched by some incredible special effects, which are sure to be overlooked, due to the lack of spectacle.  That is no matter though, because Rust and Bone will still stand as one of the year’s best for me, in a year that seems to keep trying to outdo itself. 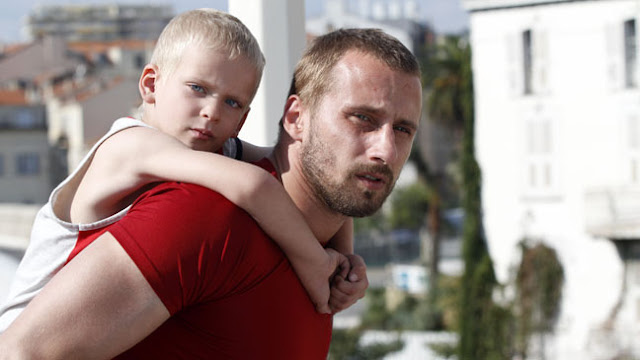 The film takes place in contemporary France.  A man, Ali (Matthias Schoenaerts), has been put in charge of his young son, and the two have traveled to the beach city Antibes.  Once there, after being made well aware that Ali is completely poor, we find that he is intending to move in with his sister, as he looks for work.  Ali was a former boxer/kickboxer, so he manages to get a gig as a bouncer.  It is while doing his work at a club where he first encounters Stephanie (Marion Cotillard).  After helping her out of a violent situation and escorting her home, Ali gives her his number, but leaves not really expecting to hear from her again.

We soon learn that Stephanie is a killer whale trainer at local sea park.  During one of the routines in front of an audience, we see tragedy strike, as a horrible accident involving one of the whales results in the loss of Stephanie’s legs.  It is a sad situation, met with much grief and despair from Stephanie, but cut to months later and we find her calling up Ali.  They form a bond at this point, which is explored in many ways, but Ali’s strength can only take these two so far. 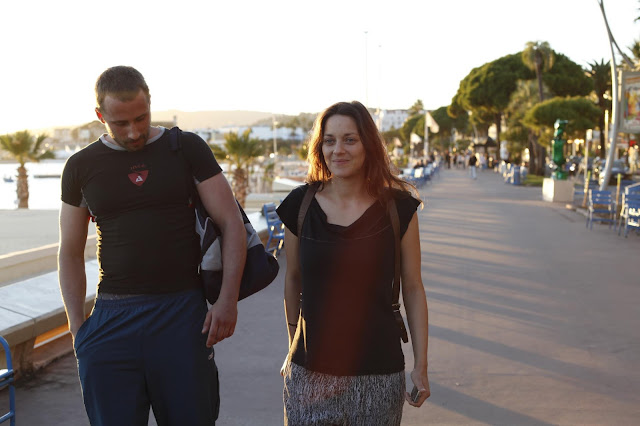 This film comes from director Jacques Audiard, whose previous film, A Prophet, was an intense prison drama that was a great film itself.  Rust and Bone was adapted by Audiard and co-writer Thomas Bidegain from a series of short stories by author Craig Davidson and turned into a feature film that has two intensely naturalistic performances at its center.  There is a way to have made this film seem incredibly maudlin in its portrayal, but it fortunately does not go that route.  The way the story plays out and how these characters interact very much seems like a director trusting what he was given to utilize to its fullest and was privileged to get a much richer character drama out of it.

Marion Cotillard is outstanding here.  She is in a role that is already challenging on a technical level, as she is put in the position of playing a character with no legs, but goes even further to provide an emotional depth to a character that could otherwise seem like a knock-off of Lt. Dan in Forrest Gump.  We have no doubt seen characters that suffered from a horrible tragedy in the past, which tends to lead towards awards rolling in their way, but Cotillard’s work here is fantastic in the way she plays it.  Rather than spend a lengthy period of time watching her get over what happened, we are more or less given a shift in time where she is at the stage of wanting to be active in life again, with more than an hour still left in the film.  The fact that she gets wrapped up in an unconventional relationship with Ali and the way she responds to what is going on in his life provides for many moments where we get to see how solid and brave of a performance Cotillard is really giving. 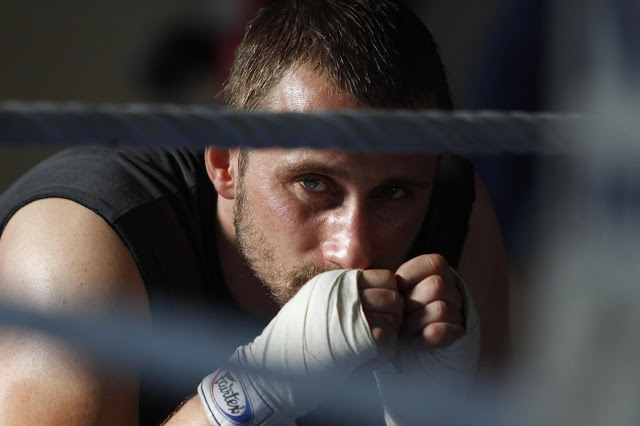 Schoenaerts, who I had just discovered from the Oscar-nominated Bullhead from 2011, has a matter-of-fact way of handling his position in life, which makes him a somewhat understandable person, even though we come to learn that he is incredibly self-involved.  That is something I really love about this performance – Ali is by no means a great guy, he is a very flawed person.  He is caring, as he wants to help Stephanie and do what he can to care for his son, but Ali is looking out for Ali most of all.  As the film progresses, Ali begins to enter underground fights for money, but also because he knows he is good at it.  He doesn’t much think of the consequences, he just wants to have fun.  He also knows he is a big guy who can attract women easily, which is why he just doesn’t get what Stephanie is providing him with.  There is more involved with him, which I do not want to spoil, but Schoenaerts is currently at the same level as actors like Tom Hardy, who know how to blend charisma with brooding intensity.

From a behind-the-scenes standpoint, the look of this film is great, as we are dealing with deeply wounded characters, bloody fights, and other rough images, and it somehow finds a stylish sense of beauty in all of it, which is fitting since the film is set in Antibes, France.  Audiard is not a stranger to using interesting filmmaking tactics, so Rust and Bone is certainly no static feature with few enhancements.  The film is very much “directed” and has a good handle on being a fine piece of filmmaking that happens to be tackling an emotional drama.  Furthermore, the score by Alexandre Desplat is another fine piece of work from a man who has six different film scores this year.  And to shout out the special effects in this film one more time, they really are quite incredible, given that we see a full range of Cotillard, in terms of situations she is placed in, with respect to the trauma her character has suffered. 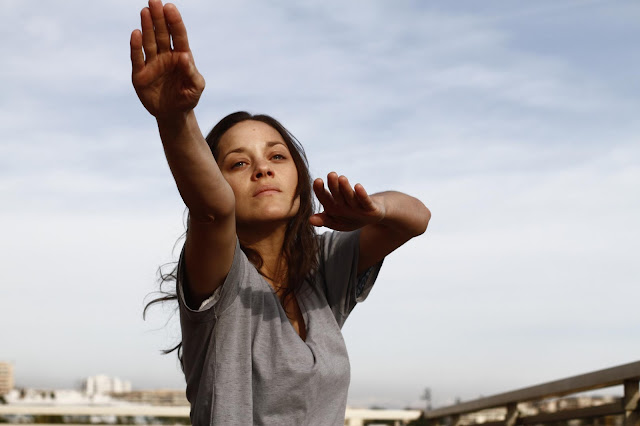 Walking into this film, I knew nothing about it, aside from who was involved.  I was aware that Audiard was directing another feature, Cotillard was the female lead, and Schoenaerts was the male lead; that was it.  The result was a film that I was really engaged by and found powerful due to its storytelling.  The way these actors portray these complex characters and how the visual aesthetic of the film captures their nuanced work, as well as creates a beautiful-looking film in general is impressive to say the least.  Rust and Bone could be accused of being a familiar journey about healing, but I was taken in by it and found the film to be very worthwhile.

Stephanie: No fear or indecision in my eyes... There is only acceptance, and a hope that, in those slender moments separating what is from what may be, there might be understanding. 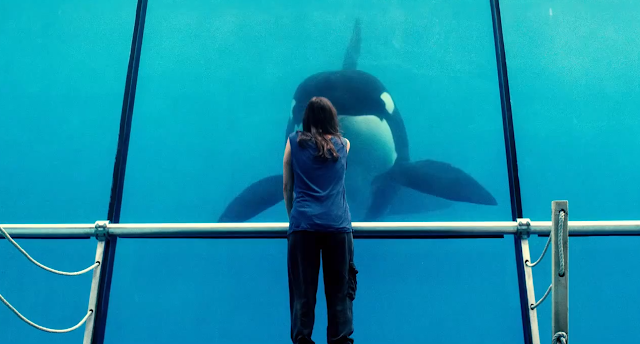 Aaron is a writer/reviewer for WhySoBlu.com.  Follow him on Twitter @AaronsPS3.
He also co-hosts a podcast, Out Now with Aaron and Abe, available via iTunes or at HHWLOD.com.
By Aaron Neuwirth
2012 Films Drama Foreign Films Jacques Audiard Marion Cotillard Matthias Schoenaerts Romance
Reactions: