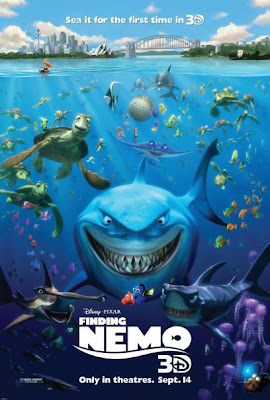 Dory:  This is the Ocean, silly, we're not the only two in here.

With a Blu-ray finally on the way this fall, Finding Nemo returned to theaters with a shiny, new 3D coat.  This is not really a review of Finding Nemo, just a brief post about my continued, unabashed love for the 5th theatrical release from Pixar, which would become the studio's most successful feature (were one to combine its box office totals, critical praise, and accolades) until Toy Story 3 came along.  It serves as a perfect template for what Pixar strives for and for me, it continues to be great in every sense.  It delivers on story, character beats, humor, drama, and adventure, while also remaining highly re-watchable.  Its return to theaters as an up-converted 3D version of the film may be a simple way to further cash-in, before the Blu-ray hits shelves, but similar to other re-released 3D features, its a decent enough excuse to allow me to see a film I really enjoy on the big screen again.


This is all just more reflection, but after watching Finding Nemo again, I just continue to love how everything works for me.  The story has a great and fairly dark setup, as we have a young couple move into a home, with kids on the way, only to have all of that ripped away from them quite quickly.  Of course the catch is that this story is set underwater and all of the characters are aquatic animals.  Still, just as I loved following the adventures of Woody Allen as an ant in Antz, I was plenty pleased with getting to follow Albert Brooks through an animated adventure.  As that adventure continues, Marlin may be a very Brooks-like character, but he fits into the world and story that is set up for him, while also continuing the trend of having actors cast in Pixar films that feel suitable to their roles.

Getting back to how things come together, the story takes true shape once Marlin meets up with Dory, voiced by an incredibly winning Ellen DeGeneres.  DeGeneres absolutely nails her role, filling Dory with so much life and joy, despite the fact that we are dealing with an over-protective father hoping to find his lost son.  Between Marlin and Dory, even with the drama involved, the film works incredibly well due to their great chemistry.  It of course helps that the lost Nemo has a whole story of his own, with its own set of characters.  The film keeps things interesting for a G-rated film that does not want to discourage its audience by implying the chance that Marlin may or may not be successful in its quest, by creating this fun story that resembles a low-key prison escape movie, complete with an older fish also from the ocean, Gil (Willem Dafoe).

Moving away from the plot, everything else about this movie soars for me.  The voice acting is all top-notch, with actors such as Geoffrey Rush, Allison Janney, Brad Garrett, and Stephen Root all filling out supporting parts.  The animation is stunning and perfectly suitable for a film of this nature.  It still looks great too!  All of the colors, environments, fish animations, etc. make for a wonderfully rich animated feature.  Thomas Newman's score is wonderful, finding a great balance in the various levels of tone that this film moves between.  And then there is the incredibly witty script from director Andrew Stanton, along with co-writers Bob Peterson and David Reynolds, which was Oscar nominated.
The last thing I should mention are the two new things one will get out of seeing this film in theaters again.  One is the 3D, of course, which does about as much as anyone would expect.  As with every Pixar film released in this format, the third dimension does not make the film better in any way, just adds a layer to it that was previously unseen.  I was just happier to view the film on a big screen, but I at least did not find the 3D distracting in a bad way.  The other thing that is worth noting is the hilarious animated short, which is once again set in the Toy Story universe.  It is called Partysaurus Rex and is just as entertaining as anyone would expect, but now with Wallace Shawn taking the lead.

Everyone has a different favorite film from Pixar.  I happen to love Finding Nemo, The Incredibles, and Wall-E the most.  'Nemo', in particular, manages to be a whole lot of fun for me because of the Marlin/Dory relationship, while also providing a great father/son story that is quite affecting.  It is a great example of how Pixar does well in putting story first, yet still having all this other great stuff to go along with it.  Getting to watch Finding Nemo again is always a pleasure and I look forward to soon owning an HD version of the film, because I really do want to just keep swimming.

Marlin:  I have to get out of here! I have to find my son! I have to tell him how old sea turtles are! 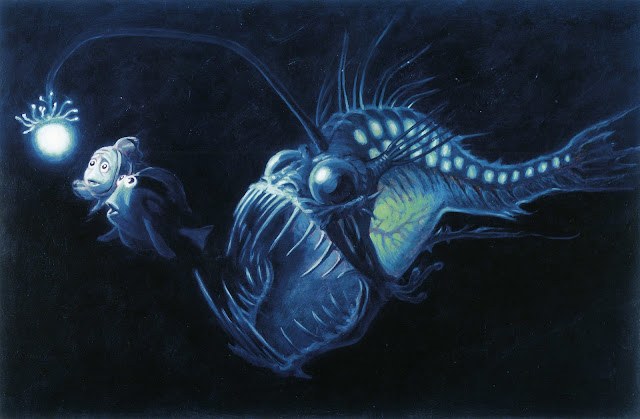 Aaron is a writer/reviewer for WhySoBlu.com.  Follow him on Twitter @AaronsPS3.
He also co-hosts a podcast, Out Now with Aaron and Abe, available via iTunes or at HHWLOD.com.
By Aaron Neuwirth
2003 Films Albert Brooks Ellen DeGeneres Finding Nemo Pixar Willem Dafoe
Reactions: