‘Ice Age’ 4: Journey Through The Mists 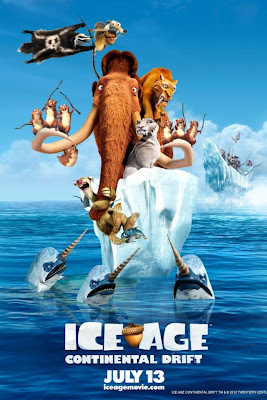 Sid:  My mother once told me that bad news was just good news in disguise.
Diego:  Is this before she abandoned you?
Sid:  Yes it was.

The arrival of a new Ice Age film is not something that initially thrilled me.  I enjoyed the first film in the series, but was let down by the sequel, which led to me not even bothering with the third entry in the franchise.  Still, given the opportunity to see this latest entry, ‘Continental Drift’, I guess I just felt like taking a break after seeing the angst-filled Amazing Spider-Man and the brutal Savages, and settling in for something a little more light-hearted, before seeing the fire rise in just over a week’s time.  Fortunately, I found this latest Ice Age film to be quite enjoyable.  While it may be missing a major element that made me enjoy the first film so much, I was still pleased with a good amount of the humor and vocal performances, animation quality (particularly the action sequences), and of course Scrat.

With Scrat in mind, that is where I can begin this plot summation.  As usual, the film spends time giving Scrat (the series’ squirrel mascot) a subplot that sort of ties into the main story.  This time, Scrat seems to be responsible for triggering massive shifts in the continent.  This leads to our heroes, Manny the mammoth (Ray Romano), Diego the saber-toothed tiger (Denis Leary), and Sid the Sloth (John Leguizamo), being separated from the rest of their group, which includes Manny’s family (his wife Ellie, voiced by Queen Latifah, and their daughter Peaches, voiced by Keke Palmer).  While Ellie, Peaches, and the rest of the main group head for a new safe haven, as the land shifts behind them, Manny, Diego, and Sid (as well as Sid’s granny, voiced by Wanda Sykes) are stuck on a floating glacier that is traveling through unknown waters.  Fortunately or not, they manage to meet a ragtag group of pirates, led by Captain Gutt (voiced by Peter Dinklage), which may cause problems with Manny’s goal for reuniting with his family.
The first film in this series is one that I enjoyed, as it presented a story that felt somewhat different than other animated fare, given that it focused on a few of characters that came together, despite all having their own personal issues regarding isolation, and used an interesting setting to make it fun, different, and intriguing.  Given that film’s success, a franchise was inevitable, but unfortunately, the more interesting subtext was lost in the first sequel, in favor of being more a generic, family-friendly adventure.  That’s fine if the jokes work for the audience it was intended for, but it is a shame that the spirit of the first film, which made it enjoyable for adults and children, did not transfer over.  Continental Drift does not return to the spirit of the first film and a good chunk of the humor does feel more like pandering to the younger audience, rather than act cleverer about what it is presenting, but I still had fun with it.

Peaches:  So tell me, when exactly will I be allowed to hang out with boys?
Manny:  When I'm dead. Plus three days, just to make sure I'm dead.

I believe it is easiest to credit that to the voice cast.  While the film is overstuffed with celebrity voices, it feels like everyone involved is having a genuinely good time.  It should be noted that in addition to the voices I have mentioned, the rest of the cast includes Jennifer Lopez, Drake, Nicky Minaj, Seann William Scott, Nick Frost, Josh Gad, Josh Peck, Aziz Ansari, and Alan Tudyk.  Still, regardless of this large supporting cast, who get their varied levels of moments to shine (and Drake and Minaj get paid and inevitable songs on the soundtrack), it always comes down to the core trio to keep the film working.  Manny still remains my favorite thing that Romano has been involved in.  Leary is fine at portraying the gruff saber.  And Leguizamo continues to find the right balance of endearing and irritating with his lisp-y sloth role.  The added bonus is Peter Dinklage as the villain, who is entertaining in his own right, providing humor and menace.
A lot of credit should also be given to the animation quality of this film, as it is a very good looking feature.  Ice Age may not be reaching the heights of what Pixar has been accomplishing, but the film still looks quite good, thanks to its ability to communicate a grand sense of scale, providing a number of colorful characters and distinct environments (despite being set during the Ice Age), and delivering one of the best animated 3D experiences I have seen (obligatory 3D rating: this film knows what it’s doing).  It should be noted that this is the first in the series to be shot in 2.35:1 aspect ratio, which I found to be really neat, because I really enjoyed the expanded scope and watching these huge blocks of ice move through giant waves of water, among the other large scale set piece sequences.  The “action sequences” throughout this film, which really zips along quite efficiently, are all quite creative and further make Ice Age: Continental Drift a worthwhile feature.  The strong scoring by John Powell certainly helps as well.

I have heard several other people refer to the Ice Age franchise as The Land Before Time of this generation, which is somewhat appropriate (by the way, figure out my title reference).  I still miss the tone of what the first film in the series had to offer, but for being the fourth film in a franchise, this could have been much worse, but instead, it still seems like a lot of care is going into the making of these films, even if they have chosen to become much more familiar in their plotting and style of humor.  I like the core actors involved and I enjoyed how the animation was handled on a technical level.  It may not be a standout in the realm of animated features, but it gets enough right and looks good doing it.  Plus, Scrat is funny.

Diego:  We made it through storms, tidal waves, and a vicious assortment of seafood. What more could they hit us with?

Note:  The film was preceded by a short, animated feature set in the world of The Simpsons, titled The Longest Daycare, starring Maggie Simpson.  It is hilarious, well made, and looks great in 3D.