The Gang Returns For An ‘American Reunion’ 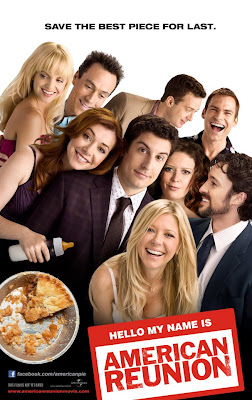 Jim’s Dad:  It seems like only just yesterday when bought all these for you…boy these pages are all stuck together here…

These American Pie films have never been shy about wearing their hearts on their sleeves and their hard-ons in plain sight.  I can admit that I was joining in on the joke of regarding this sequel as an easy way for all of the original actors who have mostly gone nowhere (not entirely true) to cash in on their biggest success; however, I have also enjoyed the previous entries in this series (not counting the direct-to-video spin-offs).  While feeling a bit overdue and being more of a film designed to remind the fans of the series how sweet and funny the guys in this film can be, opposed to making way for new fans, it still is a film that does manage to be successfully sweet and funny for the most part.  It’s also still plenty raunchy as well (though little room is left for pie). 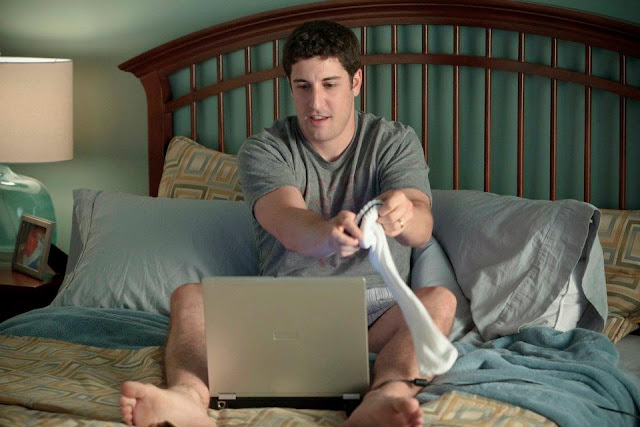 American Reunion picks up 13-years after the gang graduated from high school.  Jim (Jason Biggs) is still married to Michelle (Alyson Hannigan) and they now have a child together.  Kevin (Thomas Ian Nicholas) is now married and works from home, allowing him to watch plenty of reality TV with his wife.  Oz (Chris Klein) lives in Malibu and works as a sportscaster (and also participated in a humiliating celebrity dance show).  Finch (Eddie Kaye Thomas) leads the mysterious life of an adventurer.  And Stifler (Seann William Scott) continues to be his crude self, even after having gotten a job at an investment firm.  The gang all reunite back in their hometown of East Great Falls, Michigan, for their high school reunion (conveniently stated to have been a few years late, because people kind of forgot about it, uh-huh).
Upon arriving back home, Jim and Michelle stay with Jim’s Dad (Eugene Levy), now a widower, who can hopefully find comfort in the company of his family.  During this time, Jim also manages to reconnect with the girl he used to babysit for, Kara (Ali Cobrin), who is quite willing to please Jim.  This couldn’t come at a worst time, given that Jim and Michelle are having relationship troubles of their own.  As all of this is going on, various other past women enter back into the picture, with the reunion so close, including Kevin’s former flame Vicki (Tara Reid), and Oz’s ex-girl, Heather (Mena Suvari).  Shenanigans may be the lightest way to describe what follows, as the boys all spend an exciting weekend together, filled with plenty of laughs and debauchery, mostly instigated by Stifler. 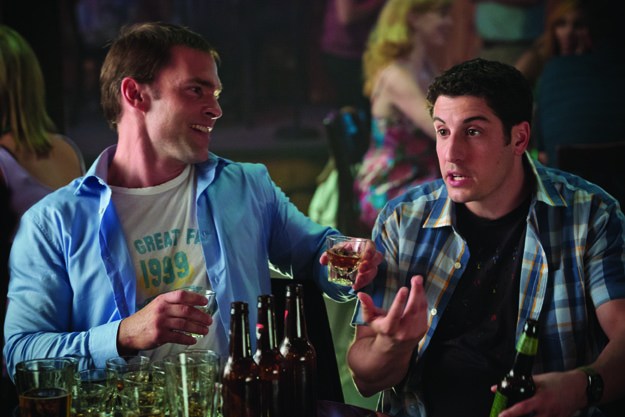 Getting past being a cynical jerk that just wants to look at this film as a cash-in for both the stars and Universal, what it really comes down to is how enjoyable this movie is.  I had a lot of fun watching American Reunion.  It played around a lot with the fact that these guys were once in high school and are now in their adult years and the film does a very good job at alerting us of how things have changed for them, while reminding us of who these guys still are.  The American Pie series has always managed to find a balance between being very broadly funny (mostly in a raunch-filled way), while also providing enough heart to keep us from finding these guys unlikable, which is something many raunchy comedies have a lot of trouble with.

Kevin:  Were we really just as obnoxious as all of these kids back in the day?

The film does have a lot of the same issues as all of the others.  Chris Klein is still a terrible actor.  The drama that revolves around Kevin and Vicky is still incredibly boring.  And the majority of the woman are still fairly one-dimensional, save for Jessica (Natasha Lyonne), the one girl who was always full of knowledge and advice, who is criminally only in the film for one scene.  Writers/directors Jon Hurwitz and Hayden Schlossberg (the creators of Harold and Kumar) managed to be a pretty good fit for this series, given that they have both fallen into the same traps of the other films, while also mining all of the good comedy out of the chemistry that this cast has together and the dirty R-rated hijinks that comes from it. 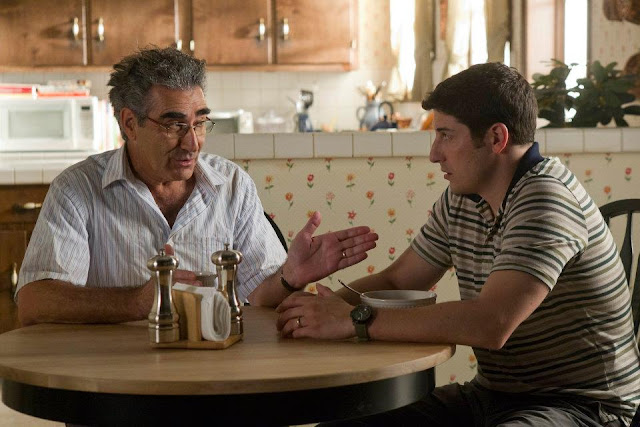 Three key culprits are put to great use in this film.  The first is Jason Biggs, the protagonist of the series.  Once again, Biggs has no shame about making himself as awkward and embarrassed as possible, but he is so sweet-natured that it is hard not to love him.  Next up is Eugene Levy, who gets credit right away for putting his eyebrows to great use as we see actual pain in his expressions when addressing his character’s deceased wife, only to have us laughing again, as he and Jim share a good talk with one another, leading up to Levy breaking back out into the party scene.  Finally, you have Seann William Scott’s Stifler.  Those who remember should know that Stifler really was not in the first American Pie all that much, but his presence has certainly grown throughout the series.  I think it is a credit to how the character is written that he has yet to grow old (both as a joke and as a character).  Seann William Scott, to his credit, has been able to make a solid career for himself, without being labeled Stifler for the rest of his life, but he so easily climbs back into this role, that it is quite rewarding to see this character, in all of his crudeness, feel quite welcome in the film.  I should note that this film really is a reunion too, as there are plenty of cameos from past cast members, with John Cho nearly stealing the film for me.
The film is quite funny to watch, which is due mostly to the work of the cast, who are quite game to jump in on a lot of great comedic set pieces.  An entire sequence involving the distraction of parents, while Jim sneaks a drunk girl into the house; and another scene revolving around a party at Stifler’s place are just great moments to watch in general.  It is a shame that the actual high school reunion portion of the film was not a larger focus and merely exists to wrap up all the plot lines.  There is also the notion of this film being a bit too long, which is mainly due to some of the key principle characters not being as interesting as some of the others, despite having all of their own subplots.  Additionally, I also found there to be somewhat of an over-reliance on audiences being reminded of the past films, as opposed to introducing new ways for everyone to really enjoy all that is offered up.  Still, the film provides plenty of dirty laughs and captures the spirit of the series quite well, given that it is coming a decade since the last time these guys all got together. 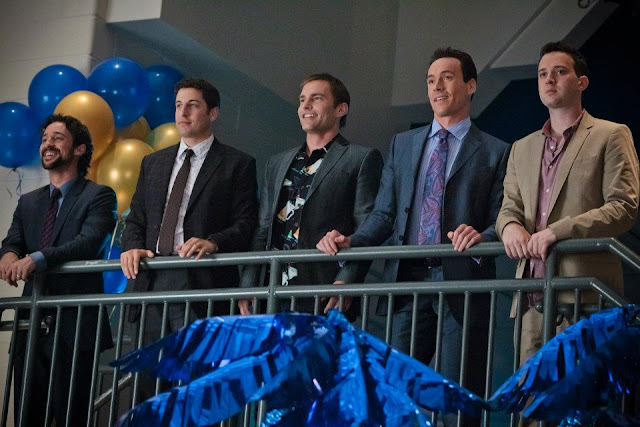 Being a reunion film, American Reunion was rewarding in providing audiences with a fresh look at a group of people that were generally well liked when they were first introduced.  Even if I have some problems with a few of the subplots in this film, getting this whole gang back together ended up being for the better.  The film has plenty of laughs, while providing a fairly nostalgic experience, and not forgetting the sweetness that exists at the core of this series.  Unlike the pie, I ate all of this up and had a good time watching the film.  It’s a fun comedy about friendship, growing up, but not forgetting who you are, and of course – MILFs. 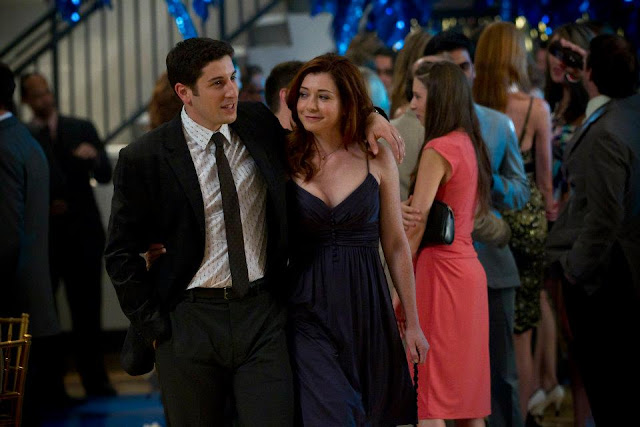