Melodramatic ‘War Horse’ Is Beautiful And Stirring All The Same 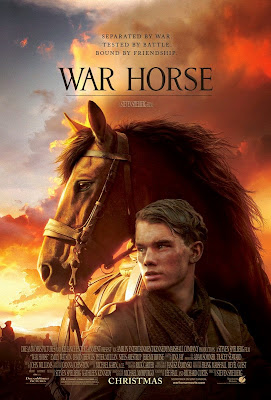 Albert:  What is it?
Soldier:  It’s a horse they found wandering about in No-Man’s Land.

It’s easy to write off sentiment.  Having a sweet-natured sensibility is apparently a negative for films that wear their hearts on their sleeves these days.  I don’t feel this way when the film is both effective and presents more than just these qualities.  Before seeing Spielberg’s beautifully made War Horse, I had recently seen The Help for the first time.  That’s a film that cuts down a significant struggle to simplistic storytelling and plays up the sentiment factor, but it works because of the strong acting present throughout.  Similarly, War Horse does not present an agenda or have the need to delve into true darkness like past Spielberg films set during wartime.  The goal of this film is to simply cover the lifetime of an equestrian protagonist and how he effects those around him, during the film’s various segments.  John Williams’ score may push things a bit over-the-top at times, but the photography and Spielberg’s solid direction in this film presents everything that has made him such an esteemed filmmaker. 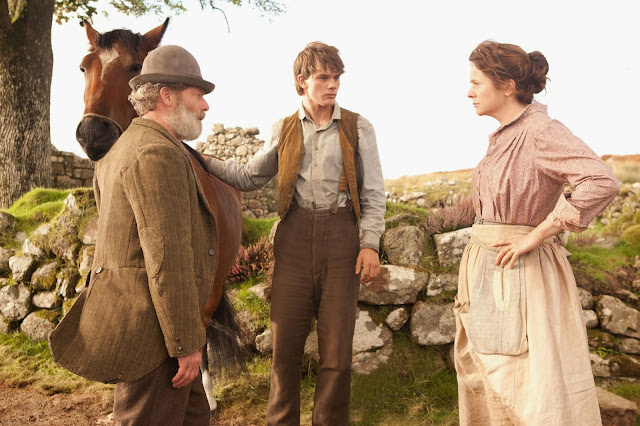 War Horse begins in Devon, England, 1914.  We witness the birth of a part-Thoroughbred horse, which is eventually purchased by stubborn farmer Ted Narracott (Peter Mullan).  Ted purchased the horse basically to spite his landlord (David Thewlis), but also needs an animal capable enough to plough his fields.  Ted’s son, Albert (Jeremy Irvine), takes an immediate liking to the horse, which he names Joey and trains him to be suitable for riding and work.  Despite finding success in Joey’s capabilities with a plough, Ted is forced to sell him to the war effort, in order to make his rent payments.  Albert is of course heartbroken.
From there, we follow Joey’s journey through World War 1 and all of the various individuals he goes under the care of.  This includes a Captain (Tom Hiddleston), who is lead into battle, while riding Joey, by his major (Benedict Cumberbatch); two young German soldiers trying to stay safe and protect each other; an elderly French man (Niels Arestrup) and his young granddaughter; a sympathetic German artillery soldier, forced to make Joey pull heavy equipment; and eventually a squad of British soldiers fighting in the trenches.  Along with being a horse with amazing luck, Joey manages to be a part of the lives of many who all see the strength in him. 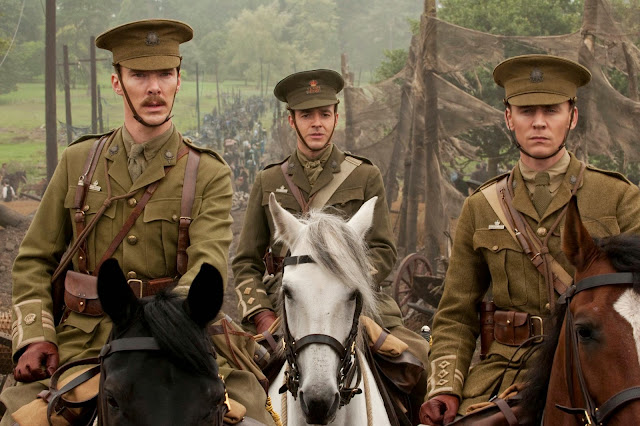 War Horse is based off of a children’s novel, which has also been adapted previously into a very involved and award winning stage play, which utilized mechanical horses.  The film plays up many qualities that seem bring out people’s best and worst reactions when it comes to Spielberg.  It is a very sentimental film, but it is constructed in a way that one does not see often anymore.  War Horse is very much assembled like something from the John Ford/David Lean School of Epics, though the scope is not quite as large.  Following Joey around, during his years of travel, serves as a way of providing vignettes that look at the times around and during World War I.  Despite having a through line, the separated nature of the story does slightly take away from the film, given the bounce around between human characters.  The thing that really pulls this all together is the wonderful cinematic approach to the feature.
War Horse is a beautiful film to watch, which is definitely served well by having a widescreen film like this be seen on a huge theater screen.  There are wonderful shots in this film that come from all over.  From early scenes surrounding a farm, to the battlefield charges with tons of people and horses all over, to the sweeping landscape settings, and then to all out trench and No-Man’s land warfare.  Spielberg’s regular cinematographer, Janusz Kaminski, does great work with camera placement, finding the right lighting, and figuring out places for he and the crew to effectively capture the emotion of a scene as well as keep things oriented around Joey and his journeys as much as possible.  The knack that Spielberg has for directing action and large scale war sequences is a great bonus as well, as adding his touches to World War I (a war not as well recognized as others – namely WWII, which Spielberg has alone made 6 films about it already), does well to expand upon what could have been routine battle sequences. 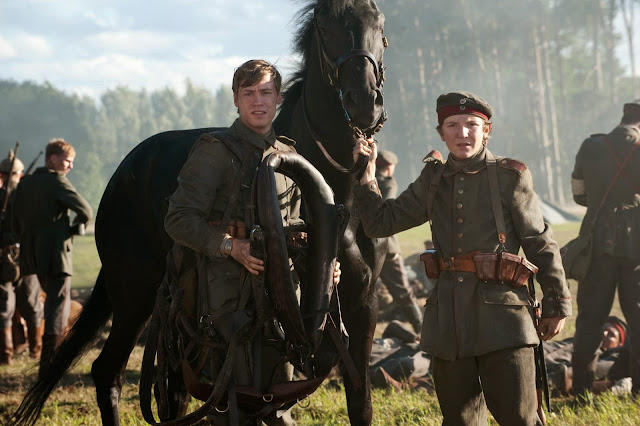 The movie is fairly long, clocking in at over two hours and twenty minutes, but I did really enjoy myself during that time.  It is not necessarily quick-paced, but it felt appropriately paced in terms of the story it was presenting.  Given the structure of the film and how it moves around between time and characters, I think it is a credit to what was involved in the filmmaking, how interested I was in enjoying the production values of the environments and various other details, along with the what the story was at the moment that I was able to appreciate how the film played out.  The fact that the film does play on one’s emotions (and I would imagine a lot more so for those who are horse or animal lovers), seems like it certainly would play a role in this as well, as far as involving one in the story goes.  Of course, given that the film seems to know that it is trying to stir one’s emotions can go either way for the viewer.
Finally, something I found interesting about War Horse was how it seemed to be uninterested in really addressing any sort of agenda.  Given that the film revolves around WWI as opposed to WWII, which seems to contain more universal themes beyond “war sucks”, it was neat to see the film basically tackle the idea of how war can be pretty ugly, despite having the film set in a PG-13 environment.  The focus of the film always stays close to people finding hope and inspiration because of Joey, for the most part, but the few instances where Spielberg does move into the horrors of war and how warfare is evolving from men on war horses to machine gun encampments provides for scenes that are quite harrowing.  Again, the film takes more pride in finding humanity in its story, based around how people involve themselves with Joey, but it still finds the time to fit in the war element, without going too dark. 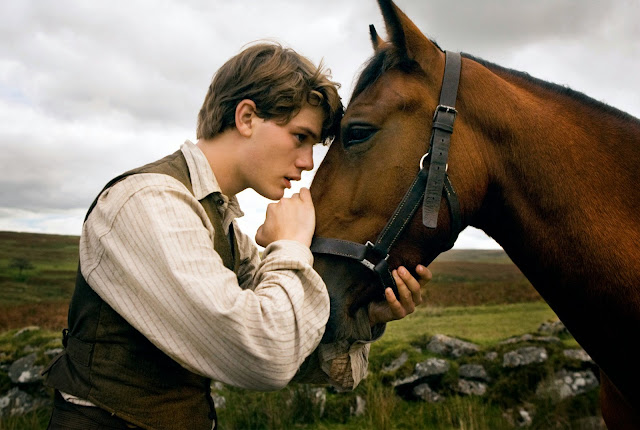 I really enjoyed War Horse.  It was not a matter of being a sucker for Spielberg or the amount of heart that it had to offer.  If anything, some of these elements were detrimental to the film, but when all was said and done, I found myself really engaged with the film throughout, admired the construction of the film (especially on a visual level), and got what I wanted out of it.  I barely even mentioned the assortment of British and French character actors present in this film, but many parts were well played in the varying amounts of time that they had.  This was a film that was deliberate in its intent, as heart-tugging as it may try to be, but is still quite well made and had much to be admired.

Albert:  …What kind of a horse?
Soldier:  A miraculous kind of horse would be my guess. 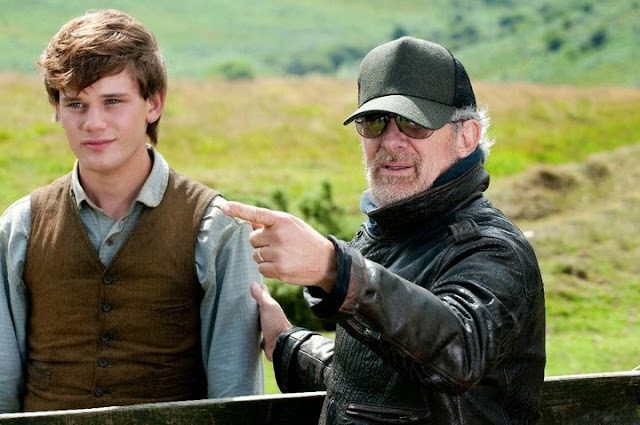