People Should Tune In For 'Broadcast News' 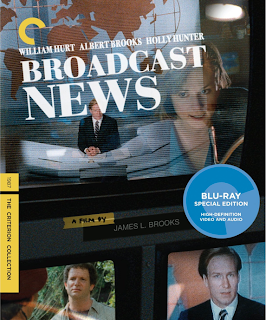 Aaron Altman: If anything happens to me, you tell every woman I've ever gone out with I was talking about her at the end. That way they'll have to reevaluate me.

I don't like to add my own baggage to these reviews, as it's generally all about the movies for me, but I have to say something about this seemingly random review.  Lately I've been busier with other aspects of this movie biz, but I managed to obtain the Criterion Collection  Blu-Ray of Broadcast News, and not having seen it in a very long time, I can easily say that this is a fantastic movie that deserves to be revisited.  It has been harder for me to be able to review everything I see due to time, but this movie deserves some extra attention, as it is brilliantly written and acted.
Holly Hunter, Albert Brooks, and William Hurt star in this smartly written romantic comedy about a basket case, a pretty boy, and a nervous talent who all work for a news station in Washington.  Hunter plays Jane Craig, the news producer who is amazing at her job, but also needs to desperately work on having her work habits restrain themselves when trying to deal with her relationships.  William Hurt plays Tom Grunnick, a new network anchor who has a pretty face, but doesn't have the intelligence to back it up, a quality he is very aware of.  Finally, Albert Brooks plays Aaron Altman, a true talent who unfortunately doesn't have the presence for being an anchor.  There is not much of a big story that involves the actual news room, beyond a few scenes concerning some big stories.  Instead, the film focuses on the relationships between these characters.  Jane and Tom go through the motions of liking each other, but Jane has problems with Tom's representation of entertainment news taking stage over substance.  Tom is interested in Jane, but also intimidated by her.  Aaron has a warm relationship with Jane, but is also secretly in love with her; he also despises Tom and all he represents. 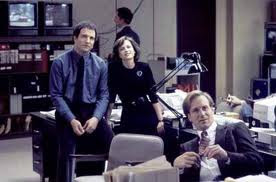 The film was written and directed by James L. Brook, who has a knack for creating well developed characters and really letting you into their world.  Generally he is less about having a full story and more about blowing up the world these characters are in, and that is what happens here.  The chemistry between the three leads, not to mention a supporting cast that includes Joan Cusack, Robert Prosky, and even Jack Nicholson in a small, uncredited role, is great.  The way they all bounce dialogue off of each other feels completely natural to the situations presented.  There are moments that feel scripted, but it always has a deliberate sense that benefits the world of this film, as opposed to purposefully striving for realism, because let's face it, people in real life don't speak as eloquently as they do in the movies.

Jane Craig:  No, no, no it wasn't just the speech, the same thing happened with this guy. I have passed some line, some place. I am beginning to repel people I'm trying to seduce.
Aaron Altman:  He must've been great looking...
Jane Craig:  Why do you say that?
Aaron Altman:  Because nobody invites a bad looking idiot up to their bedroom. 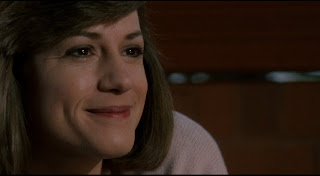 All three leads are great here.  Holly Hunter has a way of making me fall in love with her in almost every role she is in.  This time she has the task of being a know-it-all who falls apart all the time, while dealing with her position as one of the best producers around.  She has the kind of spunk required, while still being adorable.  William Hurt does something you don't see him do often, and that is play a character who is pretty dim.  Hurt generally plays people who are all very cerebral, but this time out he has the task of being a dumb person, who knows that his looks are what's getting him by.  Its an interesting role for him, and he sells it.  Albert Brooks is easily my favorite, because I think Brooks is a great talent, who knows how to be incredibly witty, funny, and vulnerable.  Here, Brooks has the task of playing the underdog, and he does so in a way where he can stick his knows up to those not as smart as him, but still in a way that makes him endearing.  A brief introduction to each of these characters as children sets up each quality of these people, and its a great way to get to know what these actors are going to be pulling off so well. 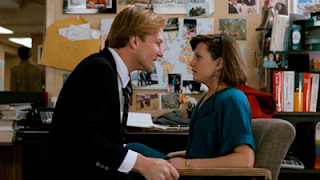 Watching this film, I was so caught up in these characters and how they were written.  It presents a solid story about relationships and friendship, but it also shows off an interesting side of the news.  As James L. Brooks has been heavily involved in television for a long time, it is easy to see how he can involve a story in these proceedings.  There are some moments that feel a bit broad, but others are quite telling in how what people see on television can be manipulated so easily.  While a film like Network is a clear social commentary, this film doesn't try to hit those beats.  Instead, it shows a fun behind the scenes look at what is essentially a business. 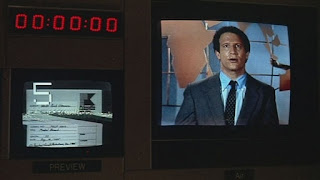 Also, speaking of fun, this is a very funny movie.  While it does deal with the drama of relationships at points, the film is very humorous throughout, given the way these characters talk to each other and the comedic talent that each of these actors have.  Brooks is the best example of this, as he knows how to sell the funny lines, but also manages some terrific physical comedy as well.  The film certainly isn't designed to be a laugh riot, but it is very sharp and clever in the way it deals with its different scenarios. 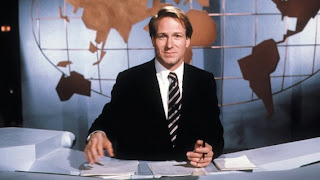 I almost walked away with just applying a simple star rating on the ol' Flixster account, but I found myself continuing to think about this movie the day after watching it.  It's such a solid feature with actors I like, playing roles I had a great time seeing them in.  Few films that would fall into this genre nowadays manage to be half as smart and well handled as this film is.  I can only hope that more people can get a chance to check it out or revisit it now.

Paul Moore: It must be nice to always believe you know better, to always think you're the smartest person in the room.
Jane Craig: No. It's awful. 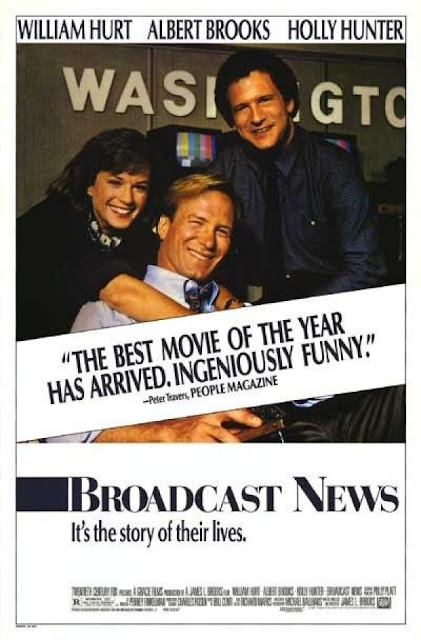