A ‘Hall Pass’ May Excuse You From This 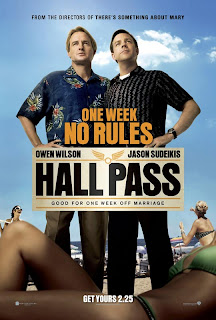 Hall Pass:  2 ½ out of 5
Fred:  It’s just you and me buddy, for the next six days!
Rick:  Alright, I’m gonna log out.
Fred:  Ok, you log out, I’m gonna go try to nail the receptionist!
This is a movie about dorks.  The characters here are a couple of nice guys, who act like nice guys caught saying inappropriate things on many occasions.  There is a lot of raunchiness and gag related humor mixed with some sentiment and a touch of heart.  Unfortunately, the film does not hit the humor marks very hard.  Both leads get to do and say some funny things here and there, but the film still left me with mixed feelings of being entertained, yet bored in many places.  Nevermind the story, which is inconsequential, the last thing you want from a comedy is to be bored. 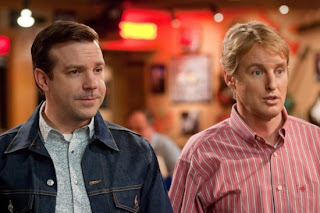 Owen Wilson and Jason Sudeikis star as Rick and Fred, two married men who seem to always be getting caught looking at or talking about other women.  Apparently it is just not enough of a good thing to be married to Jenna Fischer or Christina Applegate, who star as their wives, Maggie and Grace.  After several embarrassing situations, the only possible resolution for marital troubles is given; the wives will head up to a beach house, while they allow their husbands a week long “hall pass.”  A hall pass allows the husbands free reign to do whatever they want during the week, with no consequences.  The logic would suggest that these 40-year-old men, pining after younger women, would probably be so discouraged from actually getting to have what they want that it would end up making them appreciating what they already have even more (no prizes given, if you figure out the movie from here).  With this new privilege, the boys take it upon themselves to have all the fun they think they want to have.  Comedy ensues, occasionally. 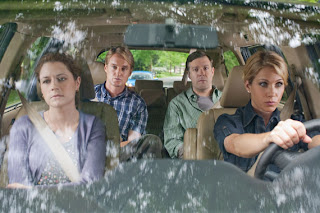 This film is brought to us by the Farrelly Brothers, who have given us such comedies as Dumb & Dumber (very funny), There’s Something About Mary (classic), and Kingpin (underrated classic).  In recent times they have made less of a splash with audiences, releasing films such as Shallow Hal and Stuck On You.  While those films may not be regarded as highly, the two things that have been consistent about the Farrelly films is how they both pack a lot of gags (many of the gross-out variety), while also maintaining a level of sweetness.  To branch off of this, it is the sweetness factor that makes me tend to enjoy their films over a majority of, say, Adam Sandler films, which tend to be very mean spirited towards its characters.  I can enjoy many types of comedies (including both Farrelly and Sandler films of the 90s especially), but balancing underlying themes with constant or satisfying laughs can be a tough thing to pull off.
Unfortunately, Hall Pass did not manage to have a steady balance of laughs and charm.  There are a good number of moments and gags that made me laugh, but the overall film is not one that I would really say succeeded.  Case in point:  the film understands how much more fun that we were having with small side characters, as opposed to the main story, that the end credits feature a hilarious sequence involving only one side character, Gary (played by frequent Ricky Gervais collaborator, Stephen Merchant).  This is the kind of issue where I can see that even the film acknowledges what has worked best only came in small doses. 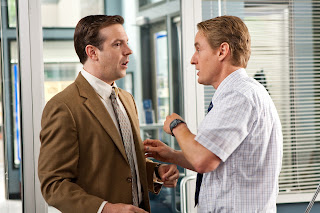 The actors do well enough here.  Wilson and Sudeikis (who I think could really emerge as a great comedic lead, given the right material) are good enough and have the right kind of chemistry together.  Fischer and Applegate do enough with the roles they are given to make their characters appear to have more dimension than they actually do.  Various other actors pop up and make with the funny the best that they can in small bits, such as Merchant and Farrelly regular Richard Jenkins, who may have some of the best moments, but only disappears just as quickly. 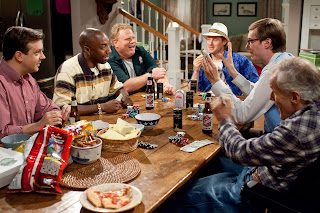 For cheap laughs, you could do worse.  I purposefully didn’t say “quick and cheap,” because the movie also feels far too long.  There is enough comedic material here to make me not regret what I saw, but the film still could have used a lot more to make it better.  The plot is flimsy, but there are still funny people to watch.  Last week I got to see Cedar Rapids, which did a much better job at playing up both its raunchiness and charming nature.  This film doesn’t hit the marks as well, but it does traipse around average. 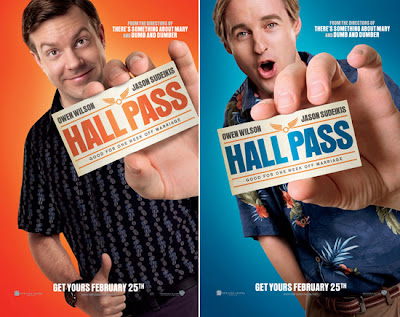