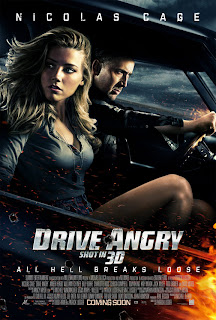 Drive Angry 3D:  2 ½ out of 5
The Accountant:  Would not want to be you when Satan finds out.
Milton:  What’s he gonna do, not let me back in?
This is strange, but I am going to have to both judge this movie, while defending Piranha 3D.  I think Piranha was the kind of film where I could have written the exact same review and assign it either a 1 star or a 4 star rating (which is what I ended up doing).  That film knew exactly what it was and it did it well.  Drive Angry also knows exactly what it is, but unfortunately, what it is as not as much fun as it should be.  There are some great bits in it for sure, with great help from one character in particular, but the film lacked a certain factor that would help it to become a rewatchable guilty pleasure for future times to come. 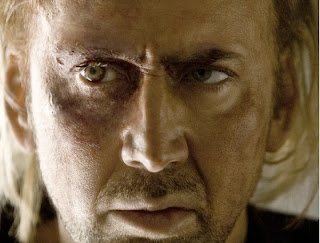 Nicolas Cage stars as John Milton, a mysterious drifter looking to find some bad men.  He manages to get a ride from a hottie waitress, Piper (Amber Heard) with a 69’ Dodge Charger.  We soon learn the story:  Milton is actually an escapee from Hell, hoping to find his kidnapped baby granddaughter, who has been taken by a satanic cult leader, Jonah King (played by Billy Burke, doing a very uncool Billy Bob Thorton impression).  The baby will be murdered under the next full moon, unless Milton can stop it, and he plans to do so. 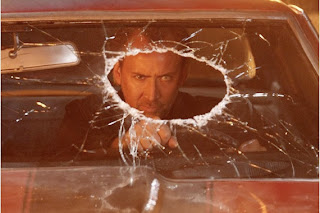 Since Satan does not approve of his prisoners going on rogue missions, he has dispatched a man known as “The Accountant” to go after Milton and bring him home.  This is where the best thing about the movie comes in, as William Fichtner’s role as The Accountant is perfect.  The movie may not be an overall recommendation, but every time Fichtner is on screen, the movie jumps up to 4 stars.  Anyway, the rest of the movie boils down to a three-way chase, with Milton and Piper pursuing Jonah and his hillbilly cult members, while The Accountant pursues Milton.  Lots of gratuitous violence, nudity, and mayhem ensue; brought to you in glorious three dimensions (which it was shot in).
I seem to get into a lot of arguments with people about Nic Cage, so I will say right off that I am a fan of his, despite being very aware of some of the terrible films he has been in.  I can also say that regardless of how bad the flick is, it is never due to Cage, who I always find to be bringing something interesting to the ridiculous parts he ends up playing.  Now, why he chooses the parts he does, that is a different story, which probably has more layers than there are in Hell.  Regardless, for this movie, in this day and age, who else would you expect to sign up for this role?  Of course you would have Cage signing up to be the shotgun toting, car loving, bleached haired, escapee from Hell.  While there was not enough of the “Cage Rage” that I would have liked to have seen, he brings enough of what is needed for this role. 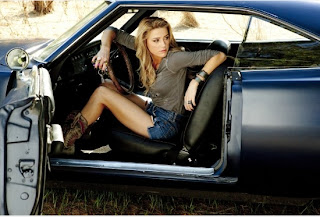 Surprisingly, I found Amber Heard to be doing a lot better in this film.  Equipped with daisy dukes and attitude, Heard is completely embracing the camp of this movie and doing so while brining both her beauty and acting talent to a film that really only needs one of those qualities.  I have already mentioned how great Fichtner is in this film, but I will add one more thing:  in the film Red, even if you have only seen the trailer, we all know the scene where Bruce Willis steps out of a speeding car in slow motion; well in this film, Fichtner has a move that tops that.  Finally, Burke’s work as Jonah’s King is easily the film’s weakest spot, because the guy just is not very intimidating compared to any of the three previously mentioned characters. 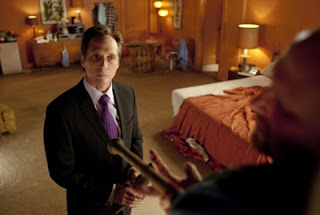 Now despite this ludicrous premise and some fun central performances, I still do not think I had as much fun as I could have.  Recently it seems that the arrival of throwback grindhouse films has been something of a plus for the film industry.  I am not quite sure why, as the Tarantino/Rodriguez flick, Grindhouse, was a flop at the box office, and none of the other attempts have really succeeded with massive success either.  Still, what films like Grindhouse or Machete had working for them amounted to very talented people involved with the production.  What a film like this or last fall’s Faster has is decent talent.  There is only so much that can be done with premises that are made to be purposefully silly, and unfortunately for director Patrick Lussier and his co-writer Todd Farmer, the momentum in a film that should be constantly revving its engines, does not keep the fun happening all the way throughout.  The direction/writing is also not poor enough to make this work better, meaning that what you are stuck with is an average version of a movie that strives to be silly, trashy fun.  I find this to be a shame, as the last film this duo made together was My Bloody Valentine 3D, which was a film that fit more into my Piranha example earlier. 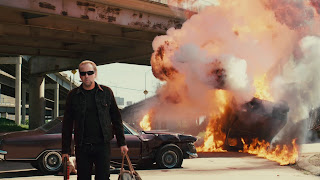 The key instance of the slight frustration I have with this movie is that there were not enough cheesy one-liners that I could think of, after having seen the movie.  There were things that I did enjoy here, such as the “cool guys don’t look at explosions” moment (pictured above) that begins the film, because this is the type of film that needs those moments.  And as I have said, Cage, Heard, and especially Fichtner do all they can to make you want to like this movie.  However, in the same way that I felt I enjoyed Machete as a two minute trailer more than as a full feature film, I am in the same camp here, but with less to recommend.  Some nice action touches are scattered throughout a film that does not do enough with its filler sections.  So drive yourself towards a decision based off of that.
My own marketing angle: *trailer voice* In Drive Angry, naked women are punched and shot at, while Nicolas Cage rip roars through Louisiana highways.  Parental guidance suggested. 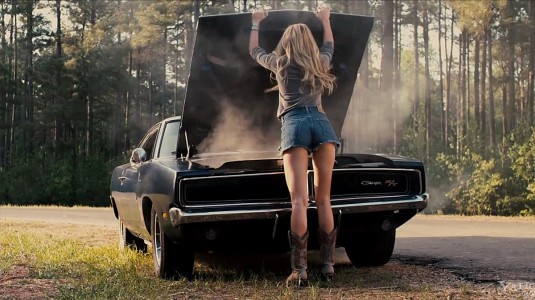